COLUMBIANA –  A 22-year-old Michigan man is facing up to 20 years in prison after he was arrested in Shelby County and charged with allegedly stealing multiple local victims’ credit card information. 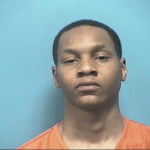 The Alabaster Police Department arrested Wallace Wade Terry Jr., who lists an address on Orange Blossom Drive in Mt. Morris, Michigan, on Feb. 1 and charged him with two felony counts of trafficking in stolen identities.

The charge is a Class B felony, according to Alabama law, and carries a maximum penalty of 20 years in prison upon conviction.

According to his arrest warrants, Terry allegedly stole eight Alabaster residents’ Mastercard and Visa credit card information “without the authorization, consent or permission of the victims.”

Terry currently is being held in the Shelby County Jail on bonds totaling $60,000, according to jail records.

He is now set to appear in Shelby County District Court for a preliminary hearing on Thursday, March 2 at 8:30 a.m.