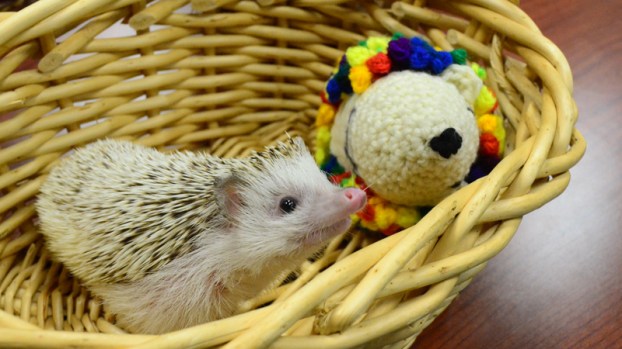 NORTH SHELBY – While most of the rest of the country was celebrating Groundhog Day on Thursday, Feb. 2, North Shelby Library was recognizing a slightly different version of the holiday: Hedgehog Day.

Oliver, the library’s resident hedgehog, was not used in an attempt to predict the weather for the next few weeks, but he has served to bring children into the library and give them an opportunity to learn about the animals.

According to the International Hedgehog Association, Romans celebrated a similar event long before Groundhog Day, with the hedgehog as the central character.

Library visitors were able to submit ideas for names for the new hedgehog, and then Oliver was chosen based on a random draw.

Oliver’s birthday was celebrated in September 2015.

Oliver’s bedding, which is unscented cat litter, is changed every two weeks, and his appliances are cleaned every other day.

He is an insectivore, which means he eats mostly insects. “Chow” made especially for hedgehogs is his main food, dried worms and crickets make for tasty treats and Oliver even enjoys a sample of fruits and vegetables every now and then.

“A lot of people, if they don’t know better, wouldn’t keep a heater, which could be very bad,” Hearn said. “They’re easy to care for, but you have to do your homework.”

Hedgehogs are nocturnal, so Oliver usually sleeps during the day and is active in the evening—including runs on the wheel in his crate the equivalent of 3 miles.

On Hedgehog Day, library visitors could meet Oliver and create a hedgehog craft.

“We’re just using it as a way to get the word out about Oliver,” Kitchens said.

More opportunities to visit with Oliver could be forthcoming, so Kitchens encouraged patrons to keep an eye on the library’s calendar of events at NorthShelbyLibrary.org.