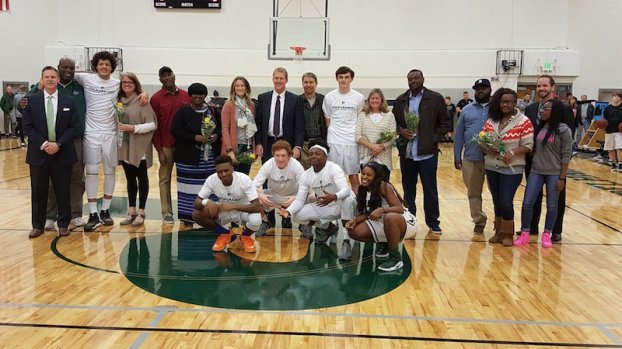 All of the Pelham seniors stand with their families and head coach Joel Floyd on senior night. (Contributed)

PELHAM – It was senior night for the No. 1 team in Class 6A as the Pelham Panthers hosted county rival Thompson in a 7A vs. 6A matchup on Friday, Feb. 3.

Things haven’t gone perfectly for Thompson this season, while Pelham came into the game on a seven game winning streak. That trend continued as the Panthers handled the Warriors 64-39 to win their eight straight game as they head into the area tournament.

Pelham had five seniors playing in the game and they came out with a clear purpose, to go out with a win. In the first quarter it was clear they had a driving force as they came out and put up 20 points in the period and more than doubled up Thompson as they held the Warriors to just nine points.

The Panthers hit a little bit of a scoring drought in the second quarter only posting 11 points, but their defensive pressure all night was the key in the win. They held Thompson to just five points in the quarter and 14 total points in the first half as they took a 31-14 lead into the break.

Coming out of the locker room, the Panthers offense came back to life.  They put up 20 points in the third, which gave them their second 20-point quarter of the game.

Yet again, the defense made its mark thanks to some key defensive play from senior Eli Hudson as they held the Warriors to 10 points, which marked the third consecutive quarter they had kept Thompson from scoring more than 10 points. After three quarters it was all Pelham as they held a 51-24 lead.

The strong first three quarters allowed Pelham head coach Joel Floyd to play some of the guys that don’t get as much playing time. In the final period, the Warriors outscored the Panthers 15-13, but that wasn’t nearly enough to wipe away the 27-point deficit as they ended up losing by 25 in the game.

All of the seniors contributed in some form or fashion throughout the game. Alabama signee Alex Reese led the way with 24 points and 12 rebounds, while fellow senior Seth Torman had a great game with 16 points of his own. Derrick Bush and Connor Hayes, also seniors, added five and four points, respectively. Junior Justin Allison had eight points, seven assists and three rebounds.

Pelham will host the Class 6A Area 8 tournament at Pelham High School, which starts Thursday, Feb. 9 with a Chelsea and Helena matchup. The Panthers, who have a bye and have clinched a spot in the Sub-regionals, will play the winner of that game on Saturday, Nov. 11 at 3 p.m.

By ALEC ETHEREDGE | Sports Editor It has been an up and down season to say the least for girls... read more