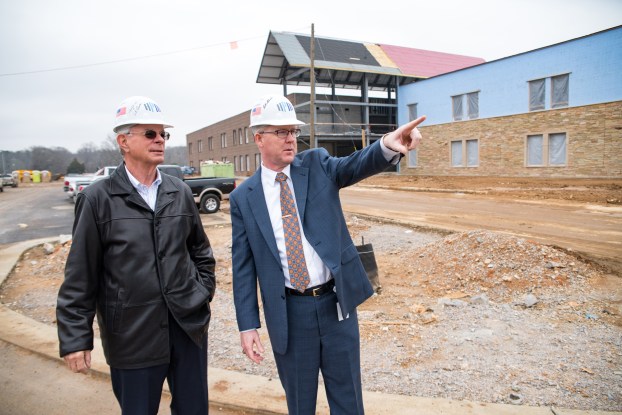 Pelham Park Middle School will open for the 2017-18 school year. A secondary access point to the school from Bearden Road will be constructed. (File)

PELHAM – The sound of hammering and the echoes of beeping construction equipment ring out through the Pelham Park Middle School construction site as crews work to complete the school in time for the 2017-2018 school year.

“It’s amazing seeing this school come together,” said school board president Rick Rhoades as Superintendent Scott Coefield took him on a tour of the facility on Thursday, Feb. 2. “It’s going to be a major improvement.”

Robert White, senior program manager with Hoar Program Management, said the school’s construction is about 60 percent complete right now. White, who oversees all Pelham City Schools’ expansion and renovation projects, said the 121,000-square-foot school is on track to be completed in July 2017.

The school, which has a price tag of more than $20 million, will open to about 750 sixth, seventh and eighth graders in the fall, but will have enough room to comfortably accommodate about 900 students, Coefield said.

The front entrance of the school will be all glass spanning from the first to the second floor, allowing a lot of natural light to shine through. Stained concrete throughout the school will contribute to its modern feel and aesthetics.

There will be two outdoor courtyards, inspirational interior graphics and the media center will have the flexibility to transform into a large meeting space.

The band and choral rooms, which were designed by teachers, connect to allow versatility. The gymnasium is also a multipurpose area that will have seating on one side and a stage for school productions and assemblies on the other.

“It’s going to be beautiful,” Coefield said. “We’ve designed the school to include add-on space if we need it in the future.”