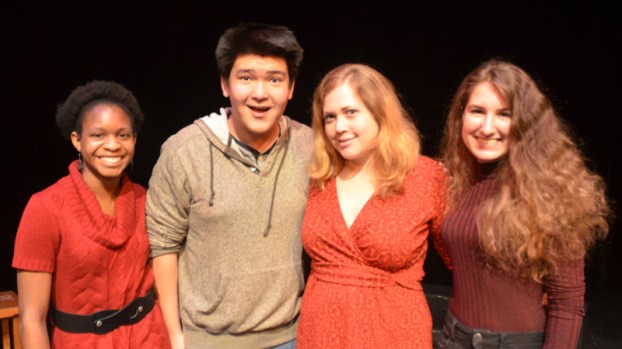 INDIAN SPRINGS VILLAGE – Reading poetry is one thing, but memorizing it and performing it is quite another thing.

Two Indian Springs School students and one former student displayed their skill at performing poetry on Thursday, Feb. 2 as part of the school’s Visiting Writers Series.

Librarian and English teacher Jessica Smith, who co-created the Visiting Writers Series in 2011, told those in attendance that a memorized poem remains a part of a person’s consciousness.

“I’ve had a poem in my brain since the ninth grade,” Smith said. “Any time I’m in nature I remember it.”

Porter will represent the school at this year’s state competition on Feb. 20 in Montgomery, following her fourth-place finish in the regional competition, which Atkins also attended.

Created by the National Endowment for the Arts and the Poetry Foundation and administered by State Arts Agencies, Poetry Out Loud is a national recitation contest that encourages students across the country to study great poetry, practice public speaking skills, and learn about their literary heritage.

The regional and state competitions follow a school-wide competition, which this year included 15 students.

The students perform for Smith, who decides who will advance to the regional competition.

The winner of the state competition advances to a Poetry Out Loud national competition for a chance to compete for a $20,000 prize.

Poetry’s part in the education of Springs students begins along with their time at the school, in eighth grade, and continues through graduation, said Sharon Howell, head of school at Indian Springs, who along with Smith is a published poet.

Berry said that among the benefits of performing poetry is how it helps with other tasks, such as learning lines for theater.

“Memorizing poetry made memorizing lines 10 times easier because you learn different techniques for memorizing,” she said and added that increased confidence is another benefit. “Had it not been for performing, I would not be able to speak in front of people.”

By GRAHAM BROOKS / Staff Writer HELENA–Runners of all different types of abilities and ages are encouraged to sign up... read more