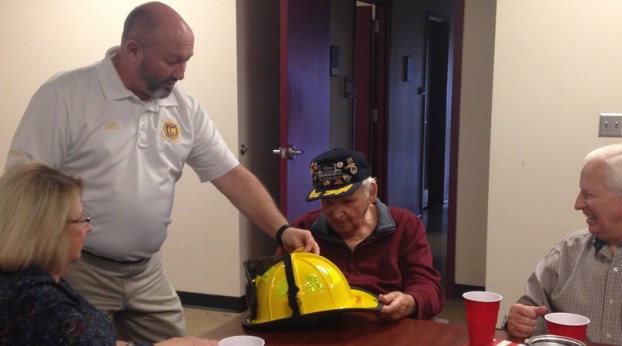 CHELSEA- Chelsea Fire and Rescue honored a retired Navy veteran by serving him lunch at 11 a.m. on Monday, Feb. 6. According to his son-in-law, Butch Summers, 90-year-old Richard Stephens is one of the 317 survivors of the sinking of the USS Indianapolis.

“They had no water, no food and they were in the South Pacific. Sharks ate a lot of them. That, to me, is the most horrific part of it,” Summers said. “He said that, one night, they had a storm and the waves got up high.”

Summers said Stephens and the rest of the survivors were stranded for five days. Many of the remaining men lost hope, and others suffered from delusions and hallucinations.

“After about the third day, most of them came to the conclusion that they weren’t going to make it. Some of the guys just took their life jackets off and went down to the bottom,” Summers said. “Some would say they knew where an island was and they were going to swim there.”

Summers said firefighters originally discovered who he was when they responded to a call from his house.

“They came by one day a couple of weeks ago. He had fallen in the bathroom, and his back was hurting. They took him to the hospital to get him checked out,” Summers said.

“His daughter mentioned that he was pretty tough, because he was one of the survivors of the USS Indianapolis. They were intrigued by that, and called and said they would like to have him for lunch.”

Previously, Stephens traveled to Mobile to speak with Nicolas Cage at the filming of “USS Indianapolis: Men of Courage.” Summers said Stephens will not watch the movie, and it took him a long time to be able to speak about the incident.

“Years ago, he didn’t talk about it. As he’s gotten older, for the last 20 years, he’s talked about it a lot. He’s to the point where he can,” Summers said. “They have a reunion every year in Indianapolis, and going to those has been good for him. Seeing these guys and talking about it has been very therapeutic.”

“I have the utmost respect for all of our military because their willingness to serve is what allows us to do what we do today. To have somebody with Mr. Stephens’s historical perspective, it’s amazing just to sit and listen to his stories,” Shirley said.

“Instead of reading about history or watching it in some Hollywood movie format, you can hear the real stories from a guy that lived them, and there’s a lot to be learned from that.”

According to Shirley, serving lunch to Stephens was the least that Chelsea Fire and Rescue could do.

“One of the things we can do is provide a good firehouse meal for him, and that’s what we chose to do.” Shirley said.