NORTH SHELBY – A fire at Abbey at Inverness Apartments on the night of Monday, Feb. 6, forced residents of six units from their homes. 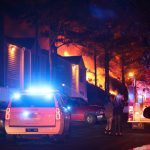 Residents look on as firefighters battle a blaze at Abbey at Inverness Apartments on Monday, Feb. 6. (CONTRIBUTED/ANDREW CHRISTOPHER)

None of the residents were injured, and they had all evacuated their apartments in the 3900 building by the time firefighters responded to the scene.

The apartment complex is located near the Home Depot store off U.S. 280 in North Shelby County.

“Upon arrival, heavy fire was venting through the roof of apartment 3902 and spreading to units 3901 and 3903,” Wilkinson said. “Firefighting crews were able to stop the fire’s advance in the attic of apartment 3904.”

Wilkinson said the apartment complex’s management team and representatives of the American Red Cross were on the scene to assist residents with relocation for the night.

Firefighting operations concluded at about 12:30 a.m. Tuesday, Feb. 7, Wilkinson said, though firefighters remained on the scene until later in the day to watch for flare-ups and turn over the scene to investigators.

CVFD fire investigators were on the scene Tuesday, Feb. 7, to begin determining the cause of the fire, and findings will be released after investigators and chief of the department, Jim Witherington, close the investigation, Wilkinson said.

Expansion will allow Asbury to hold services of 1,100-plus

NORTH SHELBY – Construction is under way on an addition to Asbury United Methodist Church that will allow the church... read more