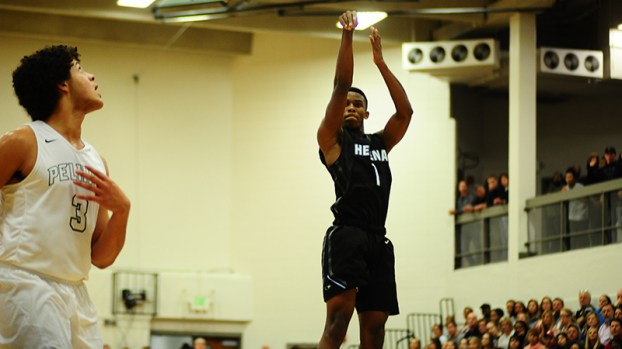 HELENA–Helena Huskies junior guard Justin Stuckey reached a milestone in his high school basketball career on Tuesday, Jan. 31, during a home game against the Thompson Warriors by recording his 1,000th career point.

Stuckey, known for being a natural scorer and a threat to score from both inside and well beyond the arc, may be the best pure shooter on the Huskies team.

In the first quarter in the game against Thompson, Stuckey had already knocked down one 3-pointer early and with 3:36 to go, Stuckey recorded his 1,000th career point at the free throw line.

The HHS public address announcer stopped play for a number of seconds to acknowledge that Stuckey surpassed the 1,000 point mark.

Stuckey finished as the second leading scorer for the Huskies against Thompson finishing with 10 points. Helena defeated Thompson 47-34.

As a team, the Huskies have accomplished numerous feats so far this season including winning both the Fort Payne and Jefferson-Shelby Hoops Classic tournaments, surpassing the 20-win mark and have consistently been ranked as a top 10 team in the state for the 6A classification. Stuckey has been one of the reasons for Helena’s success by contributing in a variety of roles as a starter.

During his sophomore campaign, Stuckey averaged 11 points per game and shot 39 percent from the 3-point line.