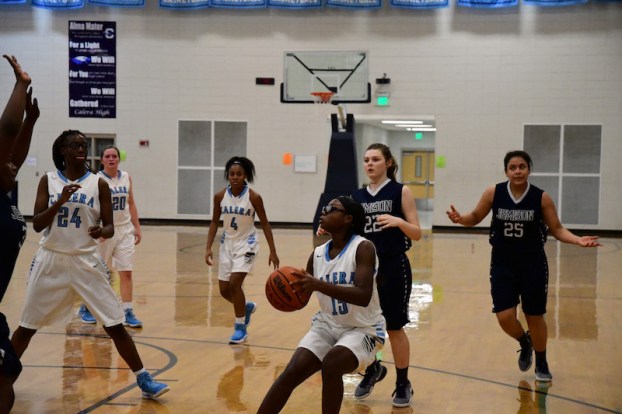 La’Taysia Cowan (No. 15) sets up for a shot in open court with several Jemison defenders trailing behind. (Reporter photo/Steven Calhoun)

CALERA – The Calera Lady Eagles advanced one step closer to the Class 5A Area 6 regular season championship on Feb. 6 with a win over Jemison.

The Eagles had beaten Jemison twice in the regular season before stepping on the court Monday night. In previous performances, Calera walked away with a 14-point lead and a 21-point lead.

Calera’s streak against Jemison continued as the Panthers fell behind in the second half of the semifinal game. The Eagles ended the night with a 26-point lead and a final score of 73-47.

Capitalizing on turnovers and driving to the basket were key parts of Calera’s win. Charley Clark had 25 points, including three 3-point shots, and scored on a couple breakaway plays after forced turnovers. Abrianna Davis played strong inside the paint and brought in 19 points for the Eagles.

“We had a good second half, but we were off to a little slow start,” Calera coach James Knowles said. “We tried to come out in the second half and luckily we were able to get them to turn the ball over a little bit.”

The game was uncertain in the first half. Both teams vied for the halftime lead and traded nearly shot for shot after Calera came back from an early 6-point deficit.

The teams entered the court at 30-28 after the half, with Jemison trailing. As the period played out, Calera picked up steam. The Eagles really started rolling after a timeout with 2:26 left on the clock, scoring 9 unanswered points to close the third.

Calera put up 25 points to Jemison’s 5 during the third period. This established the lead they would carry to the end of the game, securing a spot in the next round of the area tournament.

Calera will face Marbury High School on Feb. 9 at home to determine the area champion.