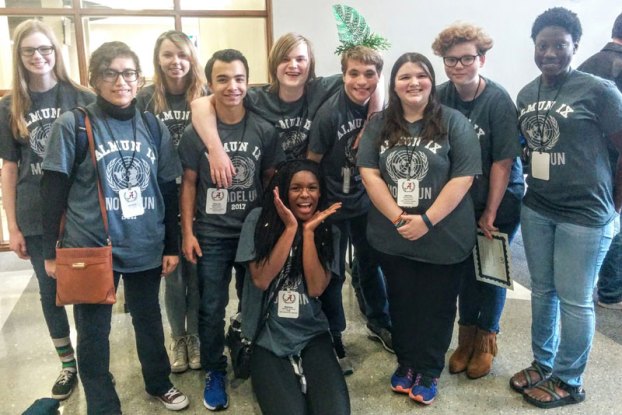 Montevallo – Ten students from Montevallo High School participated in the Alabama Model United Nations conference at the University of Alabama on Feb. 3-5.

The students represented Afghanistan and United Arab Emirates in the weekend’s model meetings. According to the group’s leader, Lee Pastor, the students prepared position papers, formed committees and passed resolutions to address the problems they were presented in the mock United Nations meetings.

“It models the real world, of what actually goes on in the United Nations,” Pastor said. “I think this is building tremendous people skills and problem solving skills that are really needed … especially in a widening globalization of business, of politics, of everything. It really expands their horizons.”

There were 19 schools from across the southeast that competed. Two schools from Shelby County Schools competed, according to Pastor.

This year was only the second time MHS competed in the model UN conference, but the students won multiple awards.

The University of Alabama has an International Relations Club that evaluates the students’ performance, according to Pastor.

Before the simulations, students researched the nation they represented to understand what stance the nation would most likely take in the real world.

“There’s a lot of work ahead of time before you go, so they can really play the role of their country,” Pastor said.

The students discussed issues such as health, immigration, terrorism and human rights in three-hour sessions as if they were real ambassadors from the nations they represented. Teams had to use diplomacy to build coalitions in support of the viewpoint they believed their nations would support, based on their research.

The club’s sponsors were Pastor and Jordan Brantley.

HOOVER – Greystone Elementary School will once again have an impressive contingent of participants in the Kids Mercedes Marathon on... read more