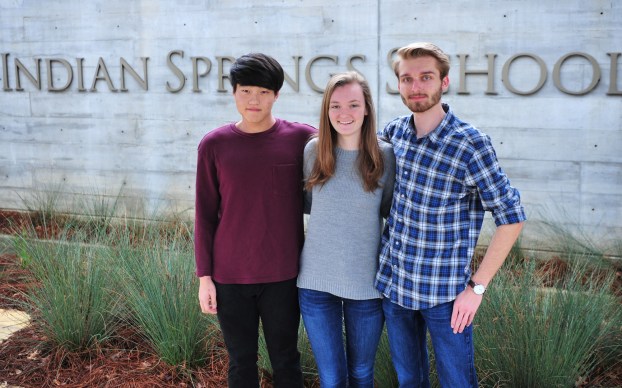 Indian Springs seniors Joon Soo Sea, Davis Tyler-Dudley and Emma Turner are in the running to be named a U.S. Presidential Scholar. All high school seniors in the U.S. who took either the ACT or the SAT are automatically considered for participation in the U.S. Presidential Scholar Program. The U.S. Department of Education then selects examinees in each state to be candidates.

Sea, who was born in the South Korean city of Gyeongsan and now lives in Indian Springs Village, received a 2400 subscore on the SAT. He has applied to Ivy League schools with hopes of studying economics and business management.

Davis Tyler-Dudley, a resident of Indian Springs Village, scored a perfect 36 on the ACT. Although he hasn’t decided what university he will attend in the fall, Harvard and Princeton universities are the top two contenders.

Emma Turner, a Birmingham resident, scored a 35 on the ACT. She has already been accepted early at Georgetown University and Boston College, however she is still waiting to hear back from Wellesley College, Barnard College, Tufts University, Yale University, Emory University and Dartmouth College.

Sea said finishing his high school career at Indian Springs, a place that he said has embraced him for who he is as a person, is a “definite milestone” in life itself.

“In the span of 10 to 15 years, I envision myself to be successful in both entrepreneurial and humanitarian fields of business,” Sea said. “Receiving a distinction of such stature is like a cherry on top, it makes the moment that much more memorable than it already is.”

Sea said individual recognition for personal achievements, especially on a national scale, are uncommon in South Korea. He said his family’s online chat room “started flooding with compliments and emojis” when they heard the news.

“It feels nice to receive this sort of widespread recognition for my achievements,” Dudley said. “I don’t feel any need to prove myself, but opportunities like this serve to remind me that I need to continue to excel in any way that I can so that I can make an impact on the world around me.”

Turner said she feels honored to be recognized on a national stage.

“I was so surprised when I received the letter,” she said. “I am dyslexic and struggled during elementary and middle school, so it really means a lot to be recognized for this academic achievement.”

She wants to major in political science and economics.

“I’m planning to work in D.C. for a couple of years and then return to Alabama to work in politics – maybe run for office,” she said.

Each year, up to 161 students are named as U.S. Presidential Scholars, one of the nation’s highest honors for high school students.