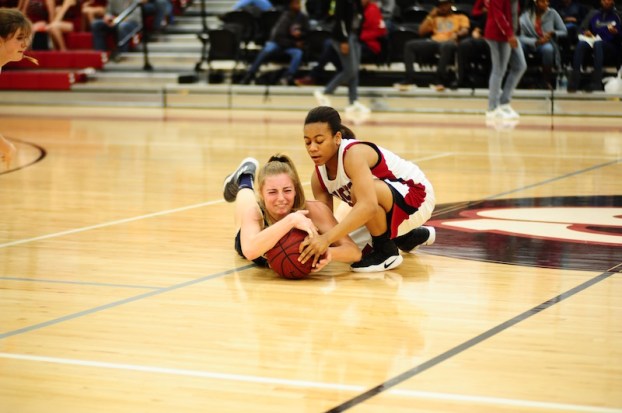 Shelby County's Aaliyah Cotton fights for the ball in a game the Wildcats won in spectacular fashion at the buzzer. (Reporter photo/Alec Etheredge)

SYLACAUGA – Both teams were holding their breath as Shelby County’s Maggie West dribbled across the half court line and heaved up a last second prayer as time expired in their Tuesday, Feb. 7, win or go home matchup with Briarwood in the first round of the Class 5A Area 8 tournament.

Briarwood was coming off of two made free throws, which gave them a 36-34 lead with six seconds left to play meaning the Wildcats had to have a basket to tie, but West had just made it inside the half court line when she pulled up in transition with one second left on the clock.

For a brief second you could hear a pin drop in the building while everybody watched intently as the ball traveled through the air. Finally, the buzzer sounded and the crowd erupted as the shot found the bottom of the net to end the silence. The Lady Wildcats’ players immediately ran to each other and started dog piling around West and head coach Ashley Phillips.

It wasn’t just the buzzer-beating shot that was spectacular, but the mountain Shelby County had to climb to keep their season alive that made the win that much more special.

After Lauren Smith ended the third quarter with an and-1, Briarwood had built a game-high 15-point lead heading to the final period.

The Wildcats started the fourth with back-to-back 3-pointers from Aaliyah Cotton and Skye Lilly for a quick 6-0 run in just 1:30 of game time.

Shelby County knew that there was blood in the water and they used that early momentum to attack on the defensive end of the floor. The Lions struggled to get anything going offensively and were even having trouble dribbling the ball, which led to several turnovers and a 10-2 run from the Wildcats to start the final quarter.

Morgan Hutchinson wasn’t ready to let Shelby County take it away, however, as she scored two points and assisted on another basket to try and keep the Lions ahead.

Back down by nine at 34-25, the Wildcats answered with another run, this time it would tie the game as they went on a 9-0 run in a quick span to knot things up at 34.

The Lions had a chance to retake the lead as Smith got to the line with 30 seconds left to play, but she missed both free throws. The rebound was controlled by Shelby County, but Briarwood played tough defense and forced a quick turnover on the sideline before the Wildcats even got three dribbles.

This gave Briarwood the last possession of the game if they wanted it. When Hutchinson hit her layup with six seconds left, they had to feel good that their 36-34 lead would hold up, but West had other ideas and made sure the Wildcats’ season was kept alive with her game-winning 3-pointer.

Her shot not only kept their season alive by moving to the area tournament championship, but it moved them to the Sub-Regionals of the playoffs as well.

After coming into the fourth with just 15 points in three quarters, the Wildcats went on a 22-4 run in the final period scoring seven more than they had in the entire game up to that point.

West led Shelby County with 15 points, 11 of which came in that impressive fourth quarter. Lilly added 12 for a second double-figure scorer, while Cotton posted nine. Smith led Briarwood with 17 points in the game

By ALEC ETHEREDGE | Sports Editor SYLACAUGA – For the fourth time this season, Shelby County and Briarwood met on... read more