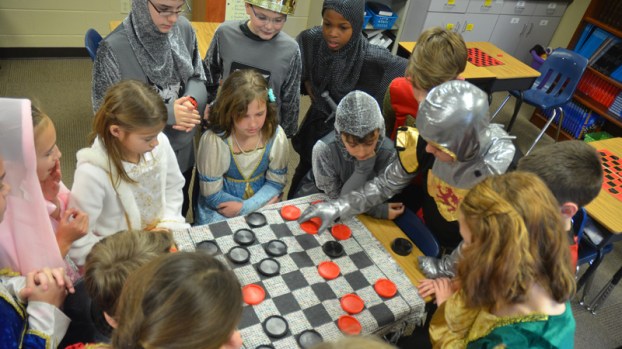 Walter Moore and William Vebber compete in the championship match of a checkers tournament in Tracy McNaughton’s class at Westminster School at Oak Mountain as part of the Medieval Feast. (REPORTER PHOTO/STEPHEN DAWKINS)

NORTH SHELBY – After dressing as a lady from the Middle Ages and enjoying a meal and performances including a juggler while seated with classmates in an elaborately decorated room, Averi Morris tried to put the Medieval Feast into words.

“It was like nothing I had experienced,” said Morris, a fourth grader at Westminster School at Oak Mountain in Lynda Moore’s class. “It was kind of like going back in time.”

The school held its annual Medieval Feast on Thursday, Feb. 2, the latest installment of an event that began during the 2004-05 school year.

The day began with each of the three fourth grade classes holding a checkers tournament.

“This gives them an opportunity to kind of experience the life we’re talking about,” McNaughton said.

Sofia Teresi and Gabe Robbins, two students in McNaughton’s class dressed in costumes they said they found on Amazon.com, said they created personal coats of arms prior to the Medieval Feast, with symbols that represented their character traits.

Robbins said he enjoyed learning about the feudal system in place during the Middle Ages, while Teresi enjoyed Gothicism.

“It was interesting to learn about that,” she said.

The students memorized the “Knight’s Code of Chivalry” and recited it at the feast.

As they walked into the room that had been decorated by a team of parent volunteers, students exclaimed “whoa!” as they saw the decorations of mock lamplight, suits of armor and goblets.

“This looks amazing,” teacher Sarah Brannan said and encouraged the students to give the volunteers a round of applause for their effort.

The feast included a first course of fruit, cheese and bread, then beef stew in a bread bowl before dessert.

Performances, which were conducted by older Westminster students, included the reading of a poem, juggling and a Robin Hood play.

“In the unlikely event I do drop one, to keep it authentic, I’d like for you to say, ‘Off with his head!’” said Ben Brannan, the juggler, and the students were happy to oblige.

Each class voted to choose a total of three students that would be knighted. The knights included Whitt Kilgore, Holden Smith and William Vebber.

To conclude the day, students played capture the flag, a game that originated in the Middle Ages.