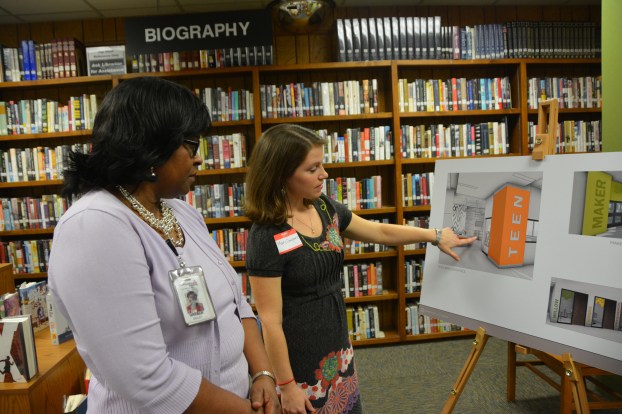 PELHAM – The city of Pelham has never built a library. The Pelham Public Library started out in the basement of City Hall in 1974, and then moved to first floor of the building it’s in now in 1984.

The second floor was home to the North Shelby County Health Center until it relocated in 1999. When the health center moved out, the library expanded to the second floor. The facility underwent some renovations during the expansion, but no major renovations have been completed since.

Library director Mary Campbell said the building has received basic upkeep and maintenance over the years, such as painting and replacing carpet, but nothing to add much-needed space to the building.

The library is bursting at the seams, with not nearly enough space to house all of its books – some of which sit atop air conditioning units because not one inch of space is wasted inside the building.

The Pelham Public Library has simply been fitting into spaces that weren’t designed for it. But all that changes in May, the month the city hopes to break ground on its 20,000-square-foot library.

If the project does begin in May as planned, it’s projected to be complete in March 2018, Campbell said at an invitation-only event held at the library on Tuesday, Feb. 7, to reveal the interior design of the building.

Campbell gave a virtual tour of the new library, explaining what each area would look like and include.

The modern décor will include various shades of grays with pops of color such as yellow, orange and lime green. Near the entrance, two glass windows will stretch from the first to the second floor, allowing sunlight to radiate through the building.

The first floor of the library will be an interactive area with seating underneath the staircase to drink coffee and chat with friends, a Teen Center that will be complete with a gaming area, a Children’s Department with reading nooks built into the wall, a Maker Space for children to work on school projects or use the 3-D printer, a Tech Lab for those interested in things like robotics, a Media Center to listen to music and audio books and a computer area that allows talking.

The Children’s Department, which will have an enchanted forest theme, was inspired by the book “The Hobbit.” It will have a ceiling that resembles a tree canopy and carpet that looks like grass.

The second floor will be reserved for those who’d like to work or read in quiet areas. It will be complete with a quiet computer lab, meeting/study rooms, a reading lounge and the adult book collection.

The Pelham Public Library is open to any Shelby County resident, not just those living in Pelham, Campbell said. And for that reason the library is always busy.

Last year the library offered 300 programs that were attended by 10,000 people. Librarians assist residents with everything from filling out job applications and preparing for interviews to helping residents complete online government forms.

“We’re doing a lot of things that people don’t realize we’re doing,” Campbell said. “Last year an average of 70 people per month were using the library for study groups or tutoring.”

Campbell said that even business meetings are held at the library.

“Libraries offer vital services to the community for free, and this new library will give us room to grow and to do even more,” she said.

PELHAM – Four Pelham City Schools teachers are following their passions outside of the classroom by leading the way in... read more