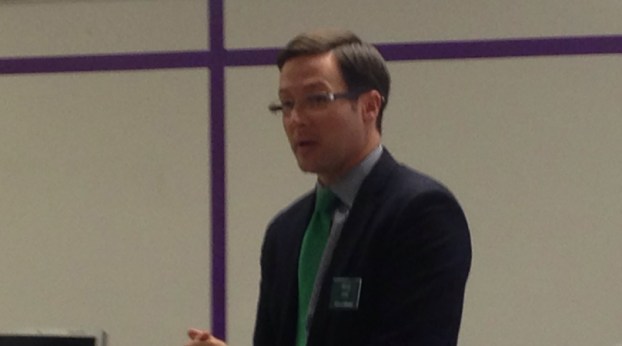 “We did this last year, too. I was asked to come out and speak about the basics of being disciplined. I wish somebody would have done this for me when I was in high school. This is one of the most important things that these kids will use for the rest of their lives,” Mims said.

Mims said it is never too early to create a financial plan and begin saving money.

“If they do that now, and stick to that plan and their goals, they’re going to be in a really good place when they get to retirement,” Mims said. “A lot of people don’t have a plan when they get out of the workforce, and they just kind of lean on family or friends who may or may not have the knowledge to give them sound financial advice.”

Mims encouraged students to pay themselves first, and not pay attention to what other people have.

“This is about getting to a point where you’re not trying to keep up with the Joneses,” Mims said. “Not many people know that there are multimillionaires right here in the community, but you don’t see it because they’re living beneath their means and saving.”

According to Mims, it doesn’t hurt to speak with a financial advisor on a regular basis.

“Most people who work on this on their own allocate their funds to the wrong places. Those people usually end up getting into worse debt,” Mims said.

Mims also presented the best way for students to handle their student loans.

“If you have student loans, attack those with a vengeance when you get out,” Mims said.

SCHS teacher Ashley Crumpton said Mims gave sound advice, which she hopes will help her students in the future.

“It’s very important for students to start preparing for their future. If they take his advice, they will do well in the future,” Crumpton said.

NORTH SHELBY – After dressing as a lady from the Middle Ages and enjoying a meal and performances including a... read more