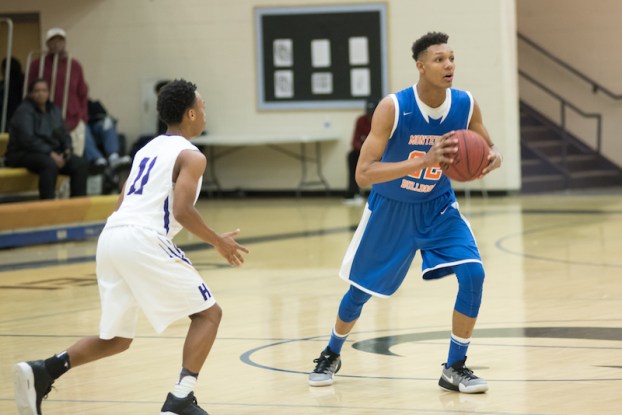 Montevallo was seconds away from having its’ season end, but Da’Shaunte Smith helped keep his team’s season alive with 22 points and 10 rebounds. (Reporter photo/Keith McCoy)

MONTEVALLO – Montevallo’s boys basketball team saw yet another double-double from senior Da’Shaunte Smith in a come-back win over Southside Selma on Wednesday, Feb. 8, in the first round of the Class 3A Area 5 tournament.

The No. 3 Bulldogs (23-4) trailed the entire game, but were able to take the lead in the final seconds to complete the 63-61 come-from-behind victory. Montevallo has now won 13 consecutive games in the second half of the season and with the win have punched their ticket to Sub-Regionals.

Smith had 22 points and 10 rebounds for the double-double, but also put up five assists and blocks in the game to give him an impressive five-plus game in every major stat category. He has flirted with a quadruple-double on several occasions this year, and his performance in this first-round area tournament matchup was just the latest installment in an impressive senior season.

TreShawn Brown also had himself a nice game for the Bulldogs posting 17 points and six rebounds. Ahmad Edwards added seven points and also had a nice game on the boards grabbing seven rebounds.

The win advanced Montevallo to the area championship where they will face Prattville Christian Friday night at 6 p.m., who they have beaten twice this year already.

After losing a coin flip to host the area tournament, Montevallo’s girls team had to travel to Montgomery for their first-round matchup with Southside-Selma on Tuesday, Feb. 7.

The No. 9 Lady Bulldogs (23-6), being one of the best teams in the state, clearly weren’t happy with the way things worked out and used Southside as their stress relief dominating the Panthers 84-45.

From the very start it was all Montevallo as they jumped all over Southside in the first quarter putting up 28 points in eight minutes of play, while holding the Panthers to just eight points during that stretch.

The Bulldogs went on to score at least 20 points in the next two quarters outscoring the Panthers 41-17 over the span of the second and third quarters to give them a 69-25 lead after three periods.

With the game in the bag, Southside did outscore Montevallo 20-15 in the final quarter to make the game look closer than it actually was, if that is even possible with a final score of 84-45.

Three of Montevallo’s players finished in double figures for the game. Emri Hannah led the way with a game-high 24 points, which included six 3-pointers. Lauryn Lilly added an impressive 22 points in the game, while Alasha Reed put up 13.

Michaella Edwards dropped 40 points and 11 rebounds in Chelsea first round area tournament game with Pelham. (For the Reporter/Cari... read more