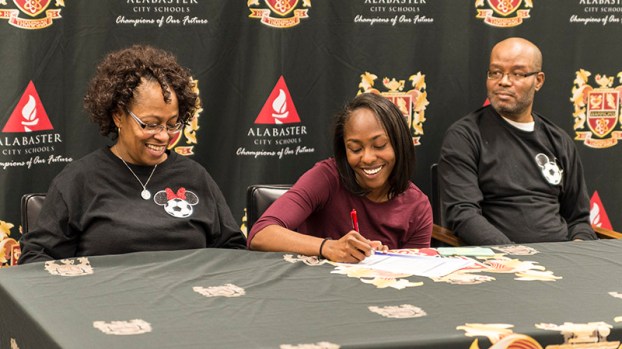 “The first time I got to see Meghan play was in seventh grade at evaluations. The ball got played to her, and she took a little bit of a bad touch and the ball popped up at about eye-level,” Button said as he recalled the event from several years ago. “As the ball came down, she turned and still beat her defender. As that happened, our JV coach elbowed me in the ribs and reminded me that I don’t take seventh-graders on the varsity team.”

Since then, Cottingham has gone on to become one of the most successful soccer players in Thompson High School history, helping to lead the team to a 44-18-8 overall record during her time with the program. At THS, she has scored 45 goals, recorded 16 assists, been a member of the north all-star team, earned several All-Metro nominations and earned a spot on the NSCAA All-State team.

On Feb. 9, Cottingham saw the fruits of her hard work, as she signed a scholarship offer to play at Columbus State University after she graduates this spring. During her signing ceremony, the THS library was filled with dozens of her teammates, family members, classmates and school employees.

“Our team has done several things in the past with CSU, and they are a fantastic program,” Button said. “They’ve been in the NCAA tournament the past 10 years, and last year they were the national runner-up. I’m thrilled that she’s getting to join such a great program, and I know she will add to their success once she arrives.”

Button credited Cottingham’s competitive spirit with leading to her success in the classroom and on the soccer field.

“She’s an outstanding student here at Thompson High School, and as a player she’s done great things,” Button said. “When she plays, whether it’s against her own teammates, or if it’s against an opponent, she is going to win. That competitiveness is what has driven her to become the young lady she is today.”

By ALEC ETHEREDGE | Sports Editor PELHAM – It was senior night for the No. 1 team in Class 6A... read more