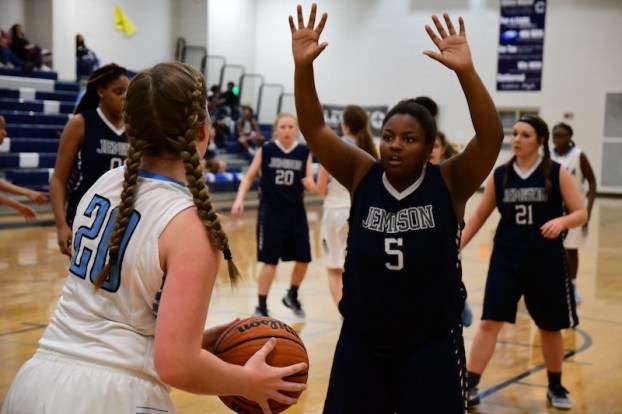 The Calera girls won the Class 5A Area 6 championship with 72-51 win over Marbury after beating Jemison earlier in the week. (File)

There were several important area tournament games on Thursday, Feb. 9, some of which featured a win or go home scenario, while others were for an area title. Here is a recap of all the action from those games.

Briarwood’s boys basketball team found themselves in the Class 5A Area 8 championship game against host Sylacauga. The Lions used a strong first half to take a narrow 30-27 lead into halftime, but couldn’t hang on down the stretch as Sylacauga looked much better in the second half scoring 41 points to win 68-57. Briarwood’s first-round win over Shelby County booked them a ticket to Sub-Regionals, which is their first playoff appearance since 2006.

After a back-and-forth first half that saw both teams have strong offensive quarters, Westminster fell 56-39 to Shades Mountain to end their season. The Knights trailed 18-6 after the first, but responded with an 18-11 second quarter to only trail 29-24 at the break. Shades Mountain outscored Westminster 27-15 in the second half to run away with it.

Calera has struggled out of area play this season, but finished a perfect 6-0 in Class 5A Area 6 to become the tournament host. The Eagles continued that strong play into the area tournament as they knocked off Jemison easily in game one and Marbury 72-51 in the championship game to win the area title. The Lady Eagles will now also host a Sub-Regional matchup.

Montevallo and Montgomery Academy are the No. 9 and 10 team’s in Class 3A and split their two regular season matchups giving the winner of the area championship game bragging rights. The Eagles won a coin toss to host the area tournament as well meaning that the Bulldogs were probably a little bitter. Both had already sealed a spot in the Sub-Regionals with their first-round win. The game was close in the first half as the Montgomery Academy led by three, 23-20 at the half. The Eagles blew things open in the second half, however, outscoring the Bulldogs 17-9 in the third quarter and holding them to just three points in the final period to win 52-32. Lauryn Lilly led Montevallo with 11 points in the game.

The Lady Wildcats fell to Sylacauga on Thursday, Feb. 9, 69-41, but after their thrilling 3-pointer at the buzzer win over Briarwood earlier in the week to win by one point, Shelby County will still find themselves in a Sub-Regional matchup.

Midfield use five different scorers in double figures including a game-high 19 from Keondra Hollis on their way to 94 points in a 94-36 win over Indian Springs. The Patriots held Indian Springs to eight points or less in the first three quarters to establish their presence. Indian Springs did win their first round matchup and is headed to the Sub-Regionals.

By ALEC ETHEREDGE | Sports Editor It has been an up and down season to say the least for girls... read more