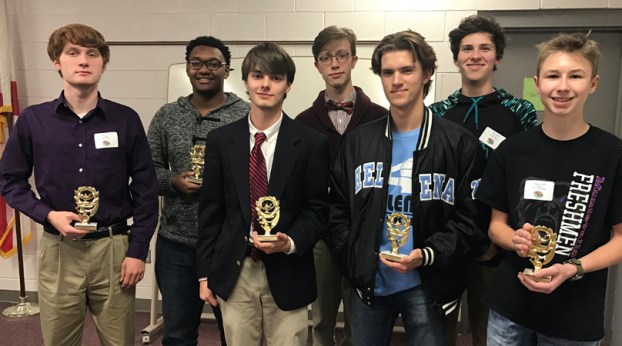 Pictured are the top individual score holders from each team in the 2017 Shelby County Varsity Scholars Bowl Competition. (Contributed)

“It’s just like a Trivial Pursuit-type game. There are different toss up questions about everything from math and literature to pop culture,” said Shelby County Schools Administrative Chief Clerk Sonja Chapin. “For some of these kids, this is their niche. We always have a great group of kids every year.”

“We go through a set of questions every single week, and I had them write questions themselves,” Rogers said. “I had them do a research project on different countries that included past leaders, geography, literature and paintings.”

OMHS varsity coach James Moore said his team will prepare for the county championship by reflecting on questions from the competition.

“They’ve been gleaning information their whole lives. They’re just especially gifted that way,” Moore said. “To prepare for the championship, we’re going to eat some food and talk about the mistakes we made today.”

The following varsity students had the highest individual scores from their teams:

The following B-team students also held the highest individual scores on their teams:

“This is truly one of these events where you are better and more enriched because you were able to participate,” Peoples said.