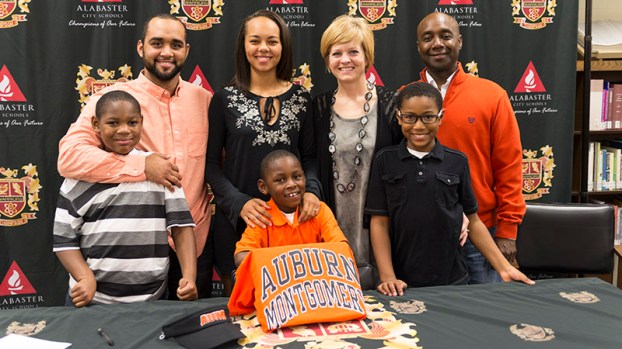 ALABASTER – Thompson High School head soccer coach Nathan Button said he was happy to see one of his star athletes sign to play at the next level, but he’s not quite ready to let her move on yet.

“I kind of wish I was giving this speech at the end of the season rather than the beginning, because Alison is on the verge of having a tremendous season,” Button said during a Feb. 10 signing ceremony in the school’s library. “She’s more fit than she’s ever been, she’s more focused, and she’s doing a fantastic job of leading our defense. I see in her a tremendous season upcoming, and I see that continuing on to AUM.”

During McCrimon’s tenure at THS, the team has been consistently ranked in the top-10 in the state. She has recorded four goals and seven assists as a defender.

“While she’s been a defender, we’ve recorded 22 shutouts with her on the team. We’ve won the metro tournament twice, we’ve won the island cup, and we’ve routinely been able to beat Hoover,” Button said, drawing laughs from the crowd.

“I know she’s going to do awesome at AUM,” said Vestavia Hills Soccer Club Programs Administrator Amy Disko, adding it’s rare to see McCrimon without a smile on her face. “I feel lucky that all of you guys are staying here in the area so I can still come see you play.”

McCrimon cited the coaching staff and current players at AUM as reasons for choosing to continue her career at AUM.

“The coaching staff was really awesome, and I was able to connect well with the team,

Warriors season comes to an end

By ALEC ETHEREDGE | Sports Editor HOOVER – There were a lot of ups and many downs in Kelly Cheatham’s... read more