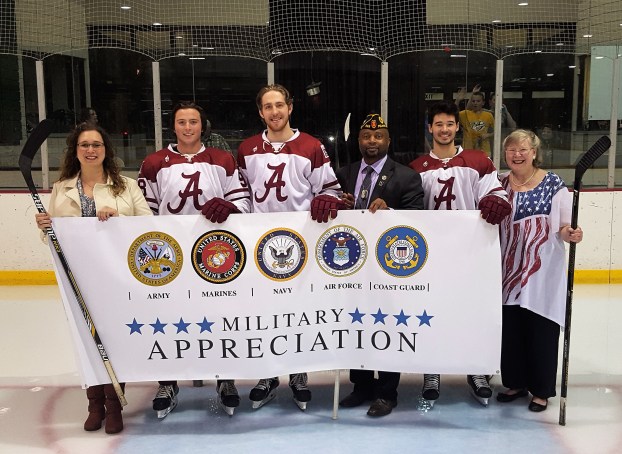 American Legion Matthew Blount Post 555 is teaming up with Alabama Hockey to host Military Appreciation Night on Friday, Feb. 17. Veterans and active military personnel and all who have honorably served will receive free admission into the game. (Contributed)

Alabama Hockey and Post 555 are partnering with the David Lindsay Chapter of the Daughters of the American Revolution, Exchange Club of Shelby County, Pelham Youth Hockey Association to honor the men and women who serve and have served in the military.

A “Fallen Heroes Table” will be on display honoring service members who have fallen in the line of duty. The American Legion will have an event table displayed in the lobby with the national colors and armed forces flags on display for attendees to take pictures with from 6-9 p.m. Photos will be available for download on the Post 555 website at Alplost555.smugmug.com.

The Pelham Fire Department will have a large American flag at the arena’s entrance.

Post 555, known as Triple Nickel, will have an informational table with a door prize for military personnel provided by Cracker Barrel Pelham.

The Exchange Club of Shelby County will present miniature flags to active military and vets while supplies last.

For additional information, contact Kenneth Paschal at 1sgpaschal@gmail.com or Anita Bennett at a6305@bellsouth.net.