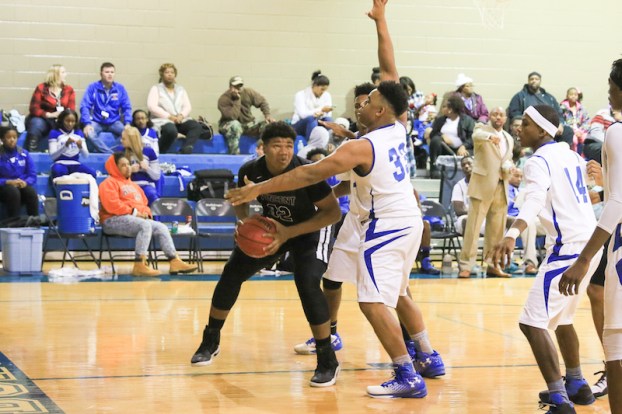 Chris Hardie, pictured with the ball, put up 20 points in the area championship game to help the Yellow Jackets win their 10th straight area title. (For the Reporter/Dawn Harrison)

VINCENT – Coming into the season, the Vincent Yellow Jackets and head coach John Hadder weren’t quite sure what to expect. They lost big man E.J. Datcher to Mississippi State and were forced back to playing small ball as a guard heavy offense.

One thing was certain though, coach Hadder would have his team ready to play. In his eight years with the Yellow Jackets, Hadder has won an area championship in each season. The year before last they made a run to the Final 4 and this past year a run to the Sweet 16.

This year those uncertainties were quickly put to rest as Vincent proved they would have no problem playing an up tempo, guard heavy offense thanks in large part to Stephen Campbell as the Jackets won their 10th consecutive area title on Thursday night, Feb. 9, over Ranburne by a score of 66-41. 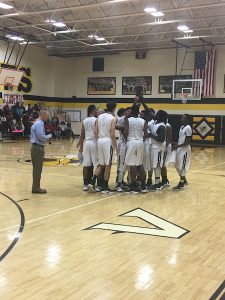 Vincent finished the regular season as area champions after going a perfect 4-0 and have now compiled 20 more wins on the season. In Hadders’ nine seasons now, he is averaging close to 24 wins per year and with at least one more game to play now that they will be hosting a Sub-Regional matchup, the Jackets will be close to that mark yet again.

It wasn’t a blowout in one quarter that led Vincent to the area title, but they consistently wore down the Bulldogs in each quarter before they finally had nothing left in the tank.

A big reason it took a consistent effort from Vincent was the defense Ranburne came out with. The Bulldogs decided to limit Campbell as best they could by using a 1-3-1 defense that revolved around chasing down Campbell to keep the ball out of his hands. Other guys had to step up and once they figured it out, the Yellow Jackets started to click.

The Yellow Jackets jumped out in the first quarter to a 13-9 lead as they played strong defensively, which helped on the offensive end as well.

As impressive as the first quarter was defensively, they matched it and then some in the second holding Ranburne to just seven points, while putting up 13 more to take a 26-16 lead into the half.

The third quarter still wasn’t that dominant as Vincent only outscored the Bulldogs 17-14, but they did extend their lead to 43-30.

By the time the final period rolled around, that punishment of consistency from the Yellow Jackets eventually grounded Ranburne. The Bulldogs were only able to put up 11 points in the fourth as Vincent had their best offensive quarter of the game posting 23 points and leading to the blowout 66-41 win for the area championship.

Chris Hardie was one of those guys that had to step up and contribute with the defenses focus on Campbell, and he did just that by dropping 20 points in the game. Campbell was the Yellos Jackets second leading scorer with 15. Both Josef Greene and Deandre Davis posted 10 points to give Vincent four scorers in double figures.

Campbell, Green and Hardie were also named to the All-Area team before their game for their consistent effort throughout the season.

By ALEC ETHEREDGE | Sports Editor The final week of the regular season snuck up on us like it does... read more