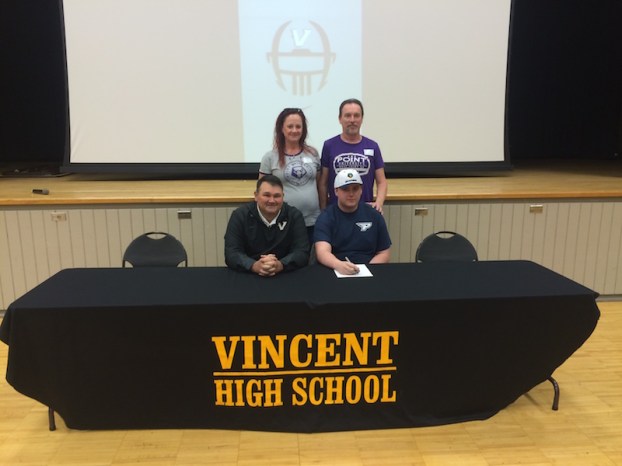 VINCENT – Vincent football is definitely a work in progress, but the future is bright for this young team and on Friday, Feb. 10, the future of the Yellow Jackets football program got to see something that should inspire them to be great.

Zeb McCord, a 6-foot-5, 290-pound senior offensive lineman on the Vincent football team, signed to play college football at Point University in West Point, Georgia. He is actually considered one of the biggest lineman in the Birmingham metro area, while also being able to run a 5.2 40-yard dash.

“It’s tough to get one of these,” Vincent head coach Wiley McKeller said of McCord’s scholarship. “It’s a combination of your natural skills and the work you put in over a career to have a chance for somebody to come pay you to come to their school and represent them on the football field and in the classroom.”

McCord had put in the work and was going to camps trying to get noticed, but couldn’t get a call.

“I went to a lot of junior days and camps and didn’t have anything going,” he told an auditorium of his teammates during a signing ceremony. “Coach McKeller made a few calls and I had an offer within a couple of days, so I just really want to thank you coach.”

It was clear his coach had an instrumental part in his recruiting process and he left McCord with some parting words.

“There’s going to be an idle Wednesday night where you’re lying in that twin sized bed in your dorm and you’re going to wonder if it’s worth it,” McKeller said. “What I want you to think about when that happens is this room and this community. We are behind you and support you.”

It wasn’t just a big day for McCord, McKeller, the Yellow Jackets’ football, team or the community, but also the parents that raised him.

“This means a lot, he’s been working hard since he was six or seven years old going to Saban camps every year since he was eight. He really has worked his tail off,” Zeb’s father Stu McCord said. “Even though he has worked hard and come a long way he is still a diamond in the rough. He has yet to see his best years and will surprise a lot of people.”

His mom, Leslie McCord, also added that there were several mornings where he just struggled to get out of bed to work toward it, so they would have to act as that motivating factor.

Congrats Mr. and Mrs. McCord, your son is headed to play college football and further his career because of your motivation and his hard work. Zeb will join the Skyhawks for the 2017 football season and will continue to be one of the bigger guys with great feet at the collegiate level.