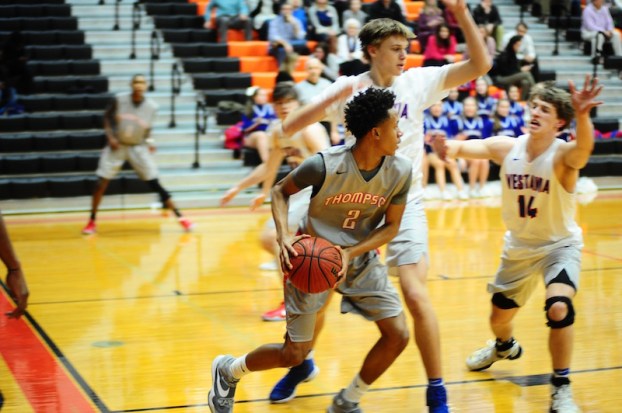 The Thompson Warriors boys basketball season came to an end in the first round of the area tournament on Thursday, Feb. 9. (Reporter photo/Alec Etheredge)

Warriors season comes to an end

HOOVER – There were a lot of ups and many downs in Kelly Cheatham’s first year as Thompson’s head boys basketball coach. His team struggled much of the year, but for one simple reason, they were extremely young.

It all came to an end for the Warriors on Thursday, Feb. 9, as they fell in the first round of the area tournament to the Vestavia Hills Rebels. Thompson found themselves in a tough situation in Class 7A Area 5 as they would have to matchup with either Hoover, who is the No. 2 team in the state, and Vestavia, who beat the Warriors by 24 and 14 in the regular season.

With their one area win over Tuscaloosa County, they ended up getting a matchup with the second seeded Rebels in the first round, who took down Thompson 76-42 to end their season.

In the first quarter, the Warriors held their own and looked like they could hang with Vestavia. The Rebels jumped up 5-0 early, but Thompson answered with a 10-3 run to take a 10-8 lead late in the period after back-to-back 3-pointers from Chris Hopkins and Jaylin Wilson.

Vestavia answered with a 5-0 run to close the quarter after a 3-pointer from Rian Shields gave them a 13-10 lead after one.

The Rebels continued the 3-point barrage into the second quarter as they hit four of them in five possessions dating back to Shields’ three to end the first.

Vestavia ended the second period with six 3-pointers in the quarter, which gave them eight in the half. Thompson on the other hand struggled with travels and fouls as they couldn’t get any kind of momentum. After all of the threes had fallen and the Warriors lack of scoring, the Rebels had gone on a 30-5 run dating back to their last possession of the first quarter to pretty much ice the game at halftime with a 40-15 lead.

Thompson’s offense finally woke up in the third quarter, mainly due to Drew Thomas, who hit three 3-pointers in the quarter for nine points. The Warriors outscored Vestavia in the period, but only by one points, which at this point in the game wasn’t nearly enough to make a dent in the Rebels 25-point halftime lead.

The Rebels weren’t about to let their lead slip away in the fourth as they outscored Thompson 16-8 to close the game out.

The Warriors were led by Thomas with 17 points in the game, 13 of which came in the second half. Thomas and Nehemiah Womack, who spent most of the game in foul trouble limiting him to zero points, were both named to the All-Area team for their strong season for Thompson.

Mac Smith led the Rebels with 14 points in the game. Vestavia had a balanced performance as 10 players scored in all, and five different players hit a 3-pointer.

Thompson will lose its top three most productive guys, but with several sophomore, freshmen and eighth graders on the squad, this team will be a force in the years to come.