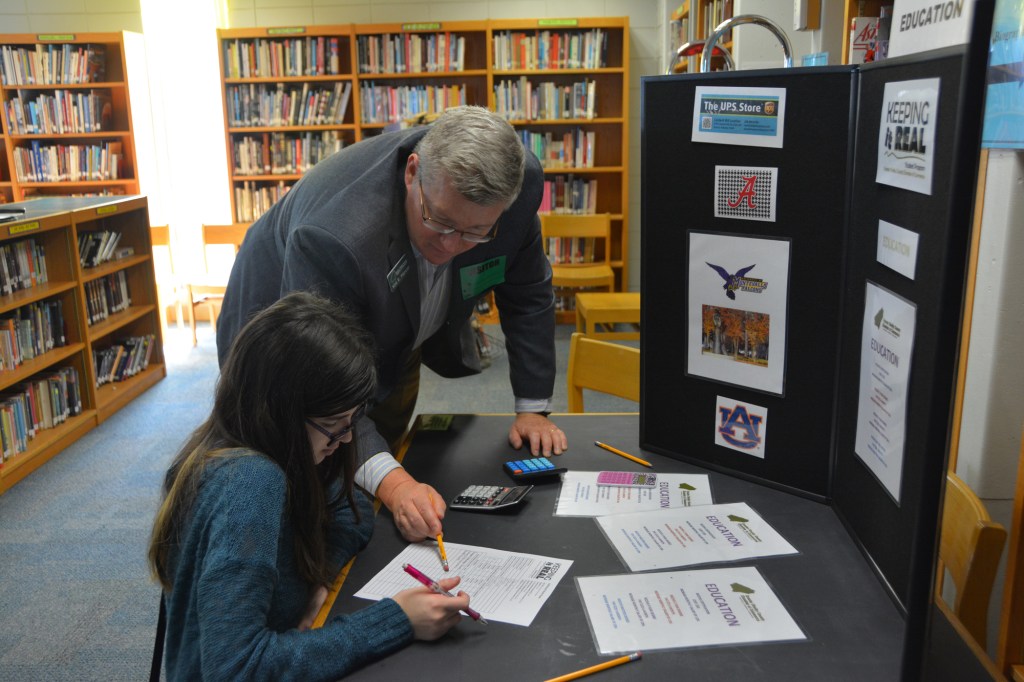 GSCCC President Kirk Mancer helps a PHS ninth-grader at the education booth, which allowed students to pay for more education in exchange for a higher monthly income. (Reporter photo/Briana Harris)

PELHAM – Pelham High School’s freshman class got a taste of what it’s like to be an adult on Friday, Feb. 10, during Keeping it Real, a program created by the Greater Shelby County Chamber of Commerce to teach students financial literacy and the importance of completing high school.

Using actual Shelby County incomes and careers, students went from station to station selecting housing, transportation, insurance and childcare based on their monthly income. Students also had to budget for groceries and had the option of purchasing cable and Internet.

Students who got halfway through the exercise and realized they didn’t have enough money to meet their basic needs were able to pay for more education, which increased their monthly income.

“We want to encourage students to stay in school and think about their futures so we can have the best workforce here in Shelby County,” said Keyla Handley, chamber director of community and investor development. “Ninety percent of jobs require a high school diploma and some type of job training or a two-year or four-year degree.”

All PHS history classes participated in the two-day program. On the first day, the chamber presented a PowerPoint explaining the program to students and assigned careers and lifestyles to each student. The second day was the interactive part of the program. Handley said about 225 freshmen participated.

Student Carlos Arturo Fuentes Amador’s assigned career was a carpenter earning $37,000 with a gross monthly income of $3,083. He was also married with one child.

At first, Amador was a bit taken aback by his assigned life.

“I’m just trying to figure out why I married my wife and she doesn’t even work,” he said laughing. “But at least I don’t have to pay for childcare, which is a plus.”

But after paying all of his bills and buying groceries, Amador had balance of $449 left in his bank account and realized that budgeting his money properly wasn’t as difficult as it seemed.

“I learned that you can’t just spend money on anything you want,” he said. “You have to prioritize. I think I did pretty good.”

The chamber’s Keeping it Real program, sponsored by Central State Bank and the UPS Store’s Caldwell Mills location, has reached more than 2,000 private and public school students throughout Shelby County.