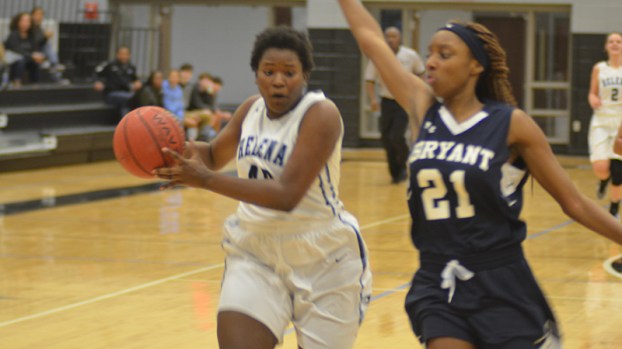 Helena’s Jen Brown (40) drives to the basket in the Sub-Regional round of the girls 6A state tournament. Helena defeated Bryant 56-43 on Feb. 13 to advance. (Reporter Photo/Graham Brooks)

HELENA–The Helena Lady Huskies have punched their ticket to Montgomery. Helena needed a win over Bryant on Feb. 13, in the Sub-Regional round of the girls 6A state tournament to advance and they did so in impressive fashion to defeat the Stampede 56-43 in a game in which Helena never trailed.

Helena set the tone from the opening tip jumping out to a 7-0 lead after a pair of baskets from Jen Brown and Jordan Jones and a 3-pointer from Mary Elizabeth Laatsch that forced Bryant to burn an early timeout.

The Lady Huskies stretched their lead to 15-0 before Bryant’s Chelsey Brown finally got the Stampede on the scoreboard with 1:20 left in the first quarter.

Helena would close out the first half leading 22-12 and Helena head coach Alan Skinner said the quick start was big for his team.

“I knew they were very athletic and I knew they had a lot of problems for us and you could see they were long and could run,” Skinner said of Bryant. “I knew it was going to be imperative to go out and execute and honestly I knew that with a team that athletic I felt like the best thing is for us to come out and jump on them with both feet.”

Up by 10 to begin the third quarter, Helena mirrored the success of the first quarter with another fast start.

The Lady Huskies began the third quarter on a 6-0 run to force another Bryant timeout and would never relinquish the lead.

Bryant came within 10 points of Helena with 4:42 to go in the game but a clutch 3-pointer by Helena’s Brandis Lang late in the game helped seal the easy win.

With the win, Helena set a new milestone for the Lady Huskies basketball program that is in just year three of existence and year one in the 6A classification.

The Lady Huskies will advance to the Regional Semifinals for the first time in school history to face Selma on Friday, Feb. 17 on the campus of Alabama State in Montgomery at noon.

“It is a testament to how hard the kids work,” Skinner said of making it to the Regional Semifinals. “There were times during this season honestly when we were playing and had teams where we were overmatched or we had a string of injuries or weren’t playing well. They had ample opportunities to say ‘Man I’m done’ but they never did that and they kept grinding and kept putting the work in. At the end of the day, it’s about them believing in what we do. It speaks for the kind of kids we have here.”

BY ALEC ETHEREDGE | Sports Editor The winter sports season is coming to a close and along with it comes... read more