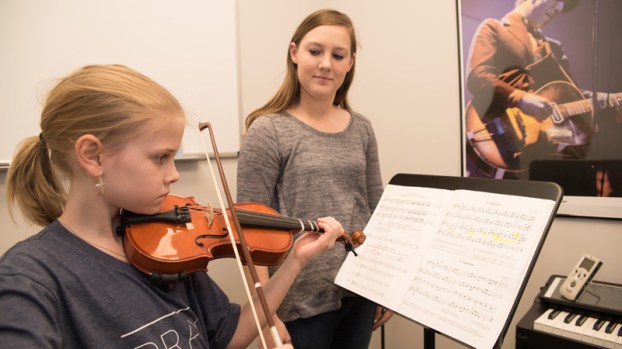 Local residents Will and Sarah Mason started Mason Music and opened the first location in Cahaba Heights in 2012.

Studios were then opened in Mountain Brook and Bluff Park before the latest addition.

Nicole Patton, manager at the Mountain Brook location, said the company’s owners and instructors share a passion for music.

A ribbon cutting for the Greystone studio, which is located at 5406 U.S. 280, was held Jan. 25 and sponsored by the Hoover Area Chamber of Commerce.

Mason Music offers lessons in piano, guitar, drums, voice and violin in a variety of formats.

Individual lessons are offered by contacting the Greystone studio at 874-9800 or greystone@masonmusicstudios.com.

Beginner camps are targeted for 6- to 9-year-olds and are typically held over spring break, summer and winter break and are designed for students to spend time with each of the instruments offered.

A spring break camp will be held March 27-31, with practice sessions from 1-4 p.m. each day, at the Greystone and Cahaba Heights locations.

Registration for the camps is open. Spots fill quickly, Patton said and added that there is usually a waiting list.

Over the summer, Mason Music will host a Singing Safari Camp for ages 3-5, another beginner camp and a Rock Band Camp for ages 10-18.

Mason Music also offers a Rock Band league, which Patton said is for musicians who are advanced to the point of being able to perform.

The spring Rock Band session is under way, and another will be held in the fall.

Rock Band was patterned after the approach to sports leagues. Under the Rock Band format, students are placed into bands, which determine independently what songs they want to learn and perform.

Practice is held each week for 12 weeks with coaches who know multiple instruments.

“A coach has to be able to maneuver through all of these instruments and help make it a cohesive unit,” Patton said.

The final performance is called “Battle of the Bands,” and judges determine a winner.

Patton encouraged anyone who is interested in participating in the fall session to watch the performances.

Registration for the fall session should be open by July 1.

Mason Music also offers a program called Overdrive. Intended for advanced musicians, the program offers the opportunity for bands to write an original song and record it in a studio.

For more information about Mason Music and the Greystone studio, visit MasonMusicStudios.com.

FROM STAFF REPORTS HOOVER – Of all the crappie fishing techniques that will be taught at Jefferson State Community College’s... read more