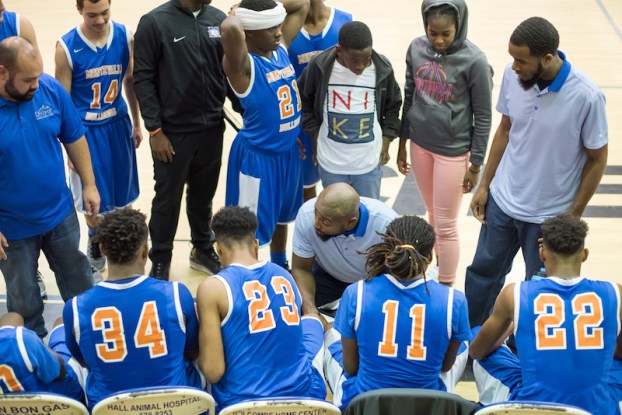 Montevallo won the Class 3A Area 5 championship with a 65-63 come-from-behind win over Prattville Christian on Friday, Feb. 10. It marked their 14th win in a row. (File)

MONTEVALLO – After trailing 47-39 entering the final quarter of play in their Friday, Feb. 10 area tournament final with Prattville Christian, it looked like Montevallo would come up short of an area championship and have their 13-game win streak come to an end.

In the fourth, however, the Bulldogs realized they were the same team that hadn’t lost a game since way back on Jan. 5 as they put together a final push. Thanks to a key 3-pointer from Ahmad Edwards, who has officially recovered from a broken leg during football season, Montevallo was able to win in stunning come-from-behind fashion, 65-63.

Edwards’ three capped off a 26-point offensive explosion in the final quarter to extend their win streak to 14 games, and give the Bulldogs their third consecutive area title. It also allowed them to finish the season a perfect 8-0 in area play.

Montevallo (24-4) started the game strong on the defensive end as they held Prattville to just seven first-quarter points. After putting up 11 in the quarter, the score was in their favor at 11-7.

The Bulldogs’ offense remained consistent putting up 14 in both the second and third, but their defense became a bit lackluster. Montevallo was outscored 16-14 in the second as the Panthers had climbed back into the game to only trail 25-23 at the half.

Prattville’s offense continued to cause problems in the second half as they put up 24 more points bringing their total over the last two quarters to 40 points. They outscored the Bulldogs by 10 in the quarter and had all of a sudden taken control of the game at 47-39.

After only scoring 39 combined points in the first three quarters, Montevallo blew the roof off in the final period with 26 points as they outscored the Panthers by 10.

Early in the season it was the Da’Shaunte Smith show for the Bulldogs, and while he is still the most productive player on the team, Montevallo has gotten plenty of help from others. In this game that trend continued as four players scored in double-figures leading to the win.

Tavarus Hall had a team-high 15 points in the win, while also collecting six steals. Smith had 14 points, six rebounds, four steals and three blocks for another impressive stat line. Edwards had 13 and TreShawn Brown added 11, while posting nine rebounds and six steals.

Edwards was named as the area tournament MVP, while Hall, Daquarius Anderson and Smith were all named to the All-Tournament team.

BY ALEC ETHEREDGE | Sports Editor The winter sports season is coming to a close and along with it comes... read more