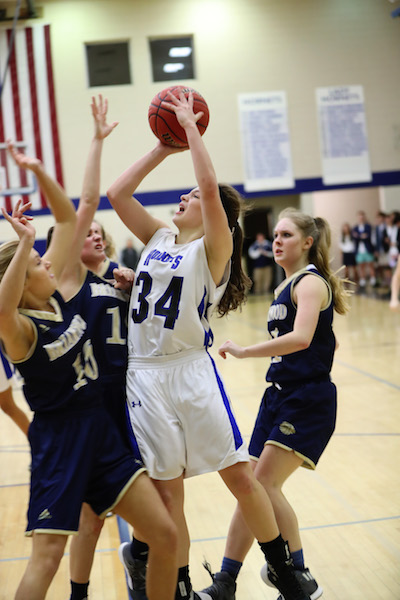 Michaella Edwards led Chelsea all season long. With her and a young core of players back next season, this team will be a favorite to make a run. (For the Reporter/Cari Dean)

TUSCALOOSA – After winning just six games a season ago, the Chelsea Lady Hornets found themselves in the sub-regionals of the playoffs a short one year later with a road matchup at No. 6 Hillcrest-Tuscaloosa to determine if their season would continue.

Chelsea led the majority of the first half as things were looking up, but in the second half, the Patriots made the necessary adjustments especially on the defensive end to win this one going away, 65-46, and end the Hornets magical season.

Although the Hornets’ season has now officially come to a close they won 11 more games than last year’s team after an overall record of 17-13 this season. With only one senior on the team, Kathryne Shoop, and their top producer Michaella Edwards only being a sophomore, this team has established themselves as one to fear going forward.

A big reason Hillcrest was able to handle Chelsea with ease late in the game was due to their focus on Edwards, which clearly worked as they held her to less than 20 points for the first time since way back on Dec. 19 against Thompson where she was limited to 11.

Early in the game, Chelsea jumped out hot offensively with 16 first-quarter points as Hillcrest struggled to handle the speed of Allie Miller and presence of Edwards. Defensively the Hornets had their best quarter of the game holding the Patriots to just 10 points as they held a 16-10 lead after one.

Chelsea maintained that lead much of the second quarter before Hillcrest went on a run to take a 24-23 lead at the half after clamping down defensively and outscoring the Hornets 14-7 in the quarter.

That defensive effort for Hillcrest carried over into the third as they turned up the intensity to a new level and held Chelsea to just four points in the period while scoring 14 more points. After outscoring them 28-11 over the second and third quarter, the Lady Patriots had busted the game open taking a 38-27 lead.

The Hornets’ offense got going again in the final period of play putting up 19 points for their most of the night, but Hillcrest had physically worn them down. Being so exhausted late in the game made it tough to play both ends of the floor and the Patriots took advantage putting up 27 fourth-quarter points to make the game look more lopsided than it actually was.

Edwards was limited to just 18 points, but had another double-double after grabbing 10 rebounds. Miller had an impressive game as well with 13 points, six rebounds, three assists and five steals, but she did struggle with some turnovers. No other Chelsea player scored more than five points, but five more did score.

The Hornets just missed out on a spot in the 6A Sweet 16, but this young team will be back to make more noise next year.

By ALEC ETHEREDGE | Sports Editor HOMEWOOD – The Westminster at Oak Mountain Lady Knights are having a magical season... read more