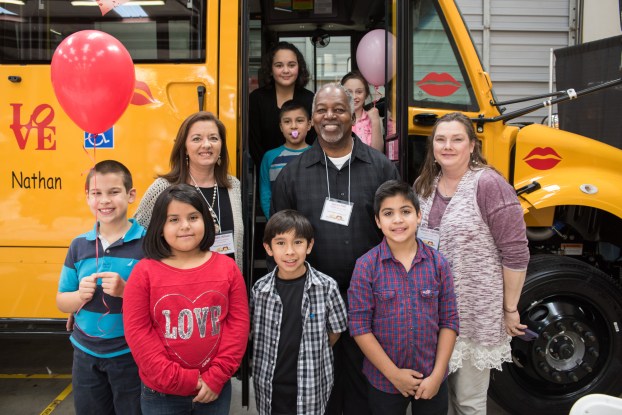 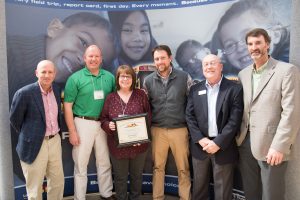 Sue Takacs (third from left), a driver for Morgan County Schools, won the title of Love the Bus Driver of the Year at the celebration. (Reporter photo/Keith McCoy)

Sue Takacs, a driver for Morgan County Schools, won the title of Love the Bus Driver of the Year at the celebration.

Bucky Law, president of Transportation South, said Love the Bus serves as an opportunity to say thank to bus drivers and other transportation employees for the work they do everyday.

“When you think about the education process, the unsung hero is the school bus driver,” Law said. “For some students, a bus driver can be the first smiling face they see in the morning and the last one they see in the afternoon. They don’t get recognized nearly enough.”

Law said Love the Bus recognizes the bus drivers who are passionate about their jobs, have a heart for the students and knows them and their families by name.

Some Pelham Ridge Elementary students also attended the ceremony to show their appreciation by drawing colorful pictures that decorated the walls and by decorating a school bus.

Throughout the state, school bus drivers travel a total of 481,000 miles every school day, said Chad Carpenter with the Alabama State Department of Education. That adds up to 86 million miles in a year.

Carpenter added that Alabama bus drivers also have an impressive safety record. During the 2015-2016 school year, there were 237 accidents where the bus driver was at fault. Of that, only 26 involved injuries.

“When you hear 237, it sounds like a lot but when you consider how many miles are being driven on a daily basis – that’s pretty good. There’s no piece of equipment that can be invented that would make a school bus safer than it is with a conscientious, caring and well-trained bus driver.”

Founded in 2007 by the American School Bus Council, the Love the Bus program is celebrated on Valentine’s Day and throughout February in school districts across the country as a way to raise awareness and appreciation for the hundreds of thousands of school bus drivers who safely transport more than 26 million students nationwide to and from school each day.

PELHAM – Pelham Public Library’s Teen Advisory Board gathered at the pavilion in City Park on Saturday, Feb. 11, to... read more