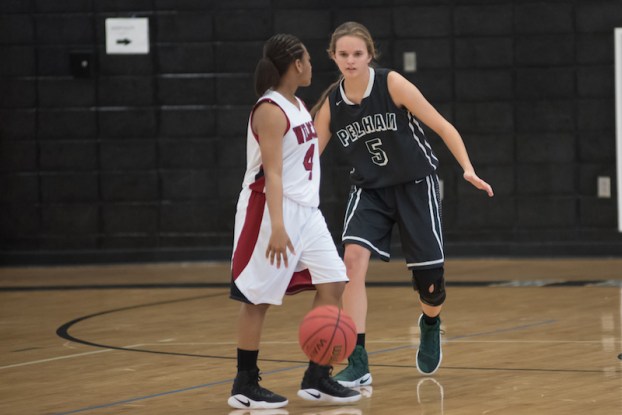 VALLEY – For the second time in less than a week, the Shelby County Lady Wildcats found themselves trailing in the final seconds of the game. Last week on Feb. 7, Shelby County trailed by two points with six seconds on the clock before Maggie West drained a 3-pointer just inside the half court line against Briarwood to extend the Wildcats’ season.

This time around on Monday, Feb. 13, it was Aaliyah Cotton’s turn to do the unthinkable. With 10 seconds left to play in double overtime, Valley hit one of two free throws to take an 80-79 lead. The Wildcats then inbounded the ball with about 4.5 seconds left to play when Cotton threw up the 30-footer from just outside the 3-point line at the top of the key.

“I thought it had a chance the entire way just by watching,” Shelby County head coach Ashley Phillips said. “I was pretty much behind her and it was dead on line with the basket.”

The shot banked off the backboard and fell in as the buzzer sounded, ending the game, but keeping the Wildcats season alive with an 82-80 win to move them to the regional round of the playoffs. For the second time in less than a week, Shelby County had staved off ending their season by a buzzer-beating 3-pointer.

“It’s incredible to witness. You get that once every five years and we’ve had it twice in the last week,” Phillips said shocked of the unbelievable ending. “(Aaliyah) is probably my best all-around ball handler and scorer so having her left in the game was huge for us.”

What Phillips was referring to was the fact that both teams were down to one or two starters after each had the majority foul out before the game made it to a second overtime.

Sam Slaughter also had a nice game for the Wildcats. She not only led Shelby County with a team-high 28 points, but hit an and-1 at the end of the first overtime to tie the game and force a second one. After she tied the game Valley had a chance to tie on a deep 3-pointer that hit off the backboard and rolled around the basket before falling out.

“She plays real hard, almost like a senior possessed,” Phillips said of Slaughter’s performance. “I think she’s had her best two games of the year in the last two games because she doesn’t want it to end.”

Another milestone in the game was coach Phillips’ celebrating his birthday and what better present according to Phillips than the team’s second ever girls basketball playoff win.

“I told them that was the greatest present they could have possibly given me,” he said.

For most of the game, every time Shelby County gathered a nine-or-10-point lead, Valley climbed right back in it with a three to end the run. However, when it came to the end and the Wildcats trailed by seven in the second overtime with one minute remaining on the clock, it was Shelby County who turned the momentum around and ended the game on a run.

“We’ve come from behind a few times this year and all we do is just keep playing and believing in what we do,” Phillips said. “You have to make shots and we continued to make shots.”

For a team that starts three freshmen, who are also the three leading scorers, and a sophomore, the Wildcats run to the Sweet 16 is one for the history books.

Michaella Edwards led Chelsea all season long. With her and a young core of players back next season, this team... read more