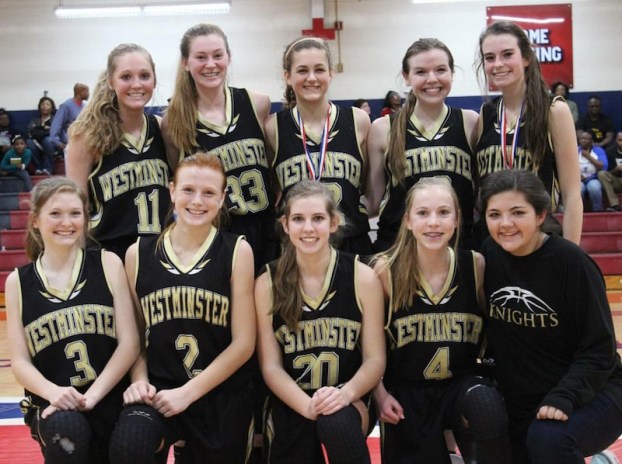 The Westminster Lady Knights are having an impressive season and have now won an area championship as well as a sub-regional matchup as they find themselves in the 1A Sweet 16. (Contributed)

HOMEWOOD – The Westminster at Oak Mountain Lady Knights are having a magical season on the hardwood that featured a Class 1A Area 8 tournament championship after taking down host Cornerstone 44-34 on Feb. 10.

Rachel Price and Megan Gache were named to the All-Tournament team for their efforts, while Anna Rebekah Richburg was named as the tournament’s MVP.

The Lady Knights and head coach Dana Gache hoped that momentum would carry over to Monday, Feb. 13, when they hosted Autaugaville in a sub-regional matchup at Samford University.

Westminster wasn’t fazed with their season on the line as they notched another accomplishment on the year by defeating Autaugaville 52-18 to advance to the Sweet 16 and continue their storied season.

All nine of the Knights’ players scored in the contest as Westminster dominated early and throughout taking advantage of a clearly mismatched Lady Eagles team.

Westminster held Autaugaville to seven points or less in all four quarters of the game as the Knights used a strong defensive effort in the win.

In the first quarter, Westminster established their presence early as they started the game on a 17-2 run to blow things open from the opening tip.

The Eagles gave the Lady Knights their best effort in the second quarter, but it still wasn’t enough as they only put up seven points to Westminster’s 13 to trail 30-9 at the half.

Their strong defensive effort carried over into the second half as well as the Knights held them to nine points for the second consecutive half and didn’t allow more than five points in the third or fourth quarter.

With Westminster having such a balanced attack using all of their players to score in the contest, they put up 22 more points in the second half to win handily by the final score of 52-18.

All of the accomplishments this team has made have been spectacular as they now sit at 19-5 on the season, but the amazing thing about it all is the youth on the team. The Lady Knights’ team consists of one junior, three sophomores, four freshmen and one eighth grader, which means they are set for the next four years to be a force in the state.

This year, although still a journey away, this team sits four wins from a state championship.

By ALEC ETHEREDGE | Sports Editor There were several important area tournament games on Thursday, Feb. 9, some of which... read more