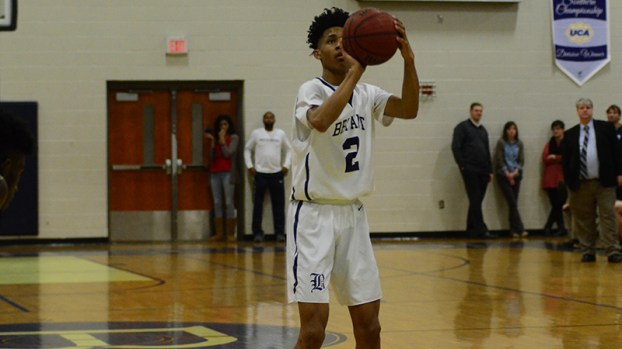 Bryant’s Jared Sherfield (2) had an incredible night scoring in a Sub-Regional game against Helena on Feb. 14. Sherfield finished with 32 points that included six 3-pointers in the Stampede’s 82-62 win. (Reporter Photo/Graham Brooks)

Huskies’ season comes to an end in sub-regional round

COTTONDALE–The Helena Huskies basketball team knew it had a challenge going on the road to face a larger Bryant team on Feb. 14 and in the end, the Stampede’s size coupled with a lights out shooting performance from Jared Sherfield led to an 82-62 win for Bryant in the boys 6A Sub-Regional round.

Helena hung tough in the first quarter but momentum quickly shifted at the end of the period.

Down 13-9 late in the period, Helena had possession and tried to cut into Bryant’s lead before the end of the quarter. However, Bryant’s Seth Williams stole the ball and jammed it at the other end to give the Stampede a 15-9 first quarter lead and the momentum.

From that point on, the Huskies couldn’t seem to recover, as the Stampede would outscore Helena 27-7 in the second quarter.

Sherfield could not miss from beyond the arc in the first half as he drained five 3-pointers and had 24 points in the first half. Sherfield finished as the game’s leading scorer with 32 points and Bryant led 42-16 at halftime.

“Tonight we knew we had to keep them off the glass and keep them out of transition and we weren’t able to do either one in the first half and we dug ourselves a hole,” Helena head coach Chris Laatsch said. “We just couldn’t overcome it.”

Bryant had nearly a 30-point lead midway through the third quarter but the Huskies kept fighting and battled down to the final whistle.

Huskies’ senior and scoring leader Jon Brown still had a great night to cap off his final game in a Helena uniform. Brown finished with 20 points and showed great poise all night, which Laatsch was proud to see from his entire team.

“I just told them after that a true character of a team being down like they were but played till the final horn and how happy I am for them and excited that they did that,” Laatsch said. “It shows what kind of character and the kids we had.”

In the end, the size and rebounding which led to extra possession for Bryant was too much for Helena to overcome in a 20-point loss, but Laatsch was happy with the Huskies first season in the 6A classification.

“As far as the season goes, to lose nine people off last year’s team and to have this many inexperienced kids was just really remarkable,” Laatsch said. “Those guys bought into their roles and sold out to their roles and tried to execute their role and that’s why this team was successful. There was no selfishness. First year in 6A being ranked as high as No. 2 and finishing ranked No. 3 and we’re just in a really tough region. Getting out of there was good and we played against some of the best and tonight just wasn’t our night.”