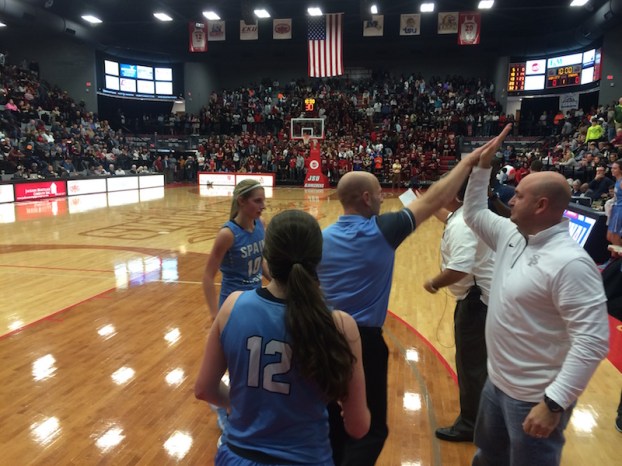 JACKSONVILLE – Trailing by three with 8.3 seconds left to play in the game, it looked all but a sure thing the Spain Park girls’ basketball season was coming to an end.

Claire Holt took that sure thing and flushed it right down the toilet. With the final seconds ticking off the clock Holt sprinted the ball up the court and took a transition three as a last ditch effort.

“As soon as I let go of the shot, I knew it wasn’t in,” Holt said. “I knew that coach had been stressing rebounds as soon as I let it go I said this has got to be a rebound because there’s not going to be another chance for us.”

And a rebound she grabbed at right about the free throw line. Holt threw the shot up and drained it as the buzzer went off, while also drawing a foul to put her at the line for a 3-point play to tie the game.

Holt stepped up and drained the free throw with the deafening noise coming from the crowd to knot things up at 43 and send the game to overtime.

“Before this game I was shooting like 200-300 free throws a day so that when my legs were kind of wobbly after running up and down the court that I can trust myself making a free throw late in the game,” Holt said.

Still though, going into overtime, Spain Park hadn’t led since it was 4-2 at the 3:01 mark in the first quarter and had trailed by as many as 11 in the fourth quarter.

Jags’ head coach Mike Chase told his girls that didn’t matter and they had Gadsden City down, while Spain Park held the momentum.

He couldn’t have been more right as Bailey Bowers came straight out of the gate to hit a 3-pointer to give Spain Park that evasive lead to put them up 46-43. Ahrielle Parks hit a free throw on the next possession to give the Jags a 4-0 start to overtime.

Gadsden City’s Haley Troup had a heck of a game and wasn’t ready for her season to come to an end, however. Troup hit a 3-pointer to bring the Titans within one at 47-46 before the Jags’ Barrett Herring drove down the lane to put Spain Park back up by three.

On the Titans’ next possession Brooke Burns hit her first three of the game to give Gadsden City back-to-back 3-pointers to tie it up at 49.

Continuing the back-and-forth battle, Spain Park’s Sarah Ashlee Barker came right back with a layup to give the Jags the lead with 1:20 left to play.

The Titans got three more looks, all in one possession, during the last minute of the game, but failed to make any of them. With three seconds left to play Holt hit one more free throw to give the Jags a 52-49 win.

The incredible comeback kept the Jags’ season alive and moves them on to the Elite 8.

Early in the game it was an offensive struggle for Spain Park, while Gadsden City seemed to be having their way, mainly thanks to Troup’s efforts.

The Jags were having several shots rim out, while Troup was seeing everything fall. She ended the half with a buzzer-beating 3-pointer just inside the half court line to give her 16 of the Titans’ 27 points in the half as they led 27-17.

“Our whole game plan was centered around her,” Chase said. “She’s going to South Carolina for a reason. She is very diverse, can shoot with range, take the ball left and spin back right and she’s strong. Our goal was to make other guys beat us.”

Clearly Spain Park got back to the game plan in the third as they made other’s besides Troup beat them. The problem for Gadsden City is nobody else could step up.

Troup had four in the quarter, but the Titans only put up five total in the third, while the Jags went on an 11-5 run to get back in the game and only trail 32-28 heading to the final quarter.

Gadsden City fired back in the fourth starting with seven quick points in less than 1:30 of game time to grab an 11-point lead, their largest of the game.

“We had to get stops,” Chase said of what he told his team to get back into it. “Every time we would get close, we couldn’t get stops and they would hit another shot to go back up.”

Barker started Spain Park’s run with a 3-pointer at the 5:59 mark and it was all Jags the rest of the way as they ended the final period on a 13-2 run to tie it at the buzzer.

Down the stretch Herring grabbed some huge rebounds that kept her team in the game and Holt actually had a one-and-one with 19 seconds left that would’ve given her team at least a share of the lead, but she missed, which led to the dramatic ending.

“That’s the last free throw I’ll ever miss,” she said after the game.

Dating back to the 5:59 mark of the fourth quarter, Spain Park outscored the Titans 22-8 the rest of the game.

Holt led the Jags with 17 points, while grabbing six rebounds. Bowers and Barker added 12 and 11 points, respectively. Herring was another key to Spain Park’s success with a game-high 16 rebounds, eight on each end of the floor.

Troup only had seven in the second half, but led the Titans with 23 in the game while adding seven rebounds. Burns added a double-double with 14 points and 11 rebounds.

The Thompson Middle School Girls’ Bowling team was recognized for their achievements this year during a recent Alabaster Board of... read more