The Montevallo Study Club recently held a meeting at the family and consumer sciences building at Montevallo High School to hear about the Black Warrior River from Nelson Brooke, a Riverkeeper.

Brooke shared with the club about his responsibilities as Riverkeeper on the Black Warrior, according to a press release. He patrols and photographs the river and its tributaries from the land, water and air, looking for pollution. He responds to citizen complaints, analyzes polluters’ permits, and collects pollution samples for lab analysis.

Brooke also educates the public about the beauty of the river and threats to it, works to empower stakeholders throughout the watershed and advocates compliance with environmental laws. He is a spokesman for the Black Warrior River watershed.

The presentation Brooke gave to the Montevallo Study Club was a part of the group’s yearlong study of Alabama Rivers.

“This year we’ve had a program from Gee’s Bend … and a person from Christmas on the River in Demopolis,” President Betty Walker said. “They all pertain to rivers.”

While learning about the Black Warrior on Jan. 24, the women enjoyed food prepared by the culinary arts program at MHS. According to the press release, the event provided the first opportunity for the students to serve a “plated” function. 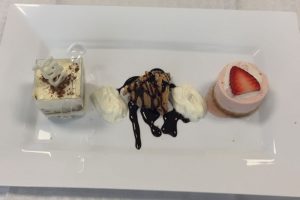 The desserts created by the MHS culinary arts students. (Contributed)

The Montevallo Study Club meets once a month from September through May to discuss a set topic and hear from guest speakers. The club invites new members until it meets its set 20-member quota each year. According to Walker, most of them have been or are professionals in the community.

“It’s some very involved in the community women,” Walker said.

The club has annual dues of $20 and gives this money back to the community each year. According to Walker, the club will decide in April where to donate this year’s funds.

PELHAM – On Tuesday, Feb. 28, the Pelham YMCA will be kicking off its 2017 Campaign that raises money to... read more