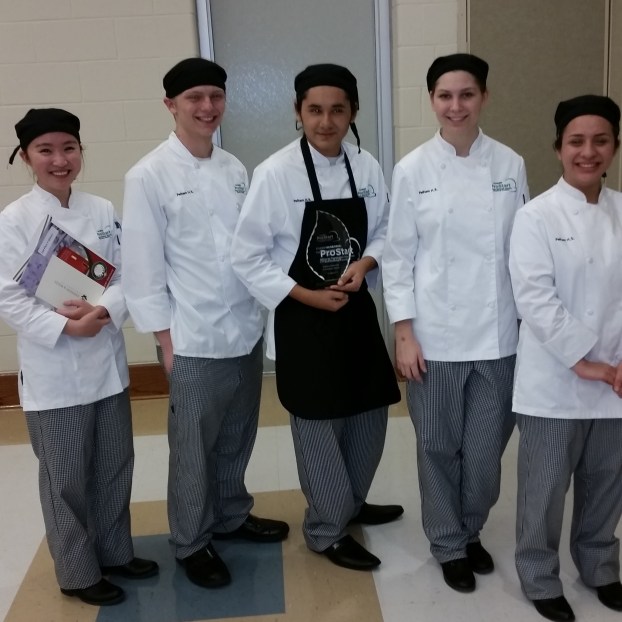 During the competition, which was held at the Jefferson State Culinary Institute, the team of five was challenged to create their own three-course meal menu and figure out food costs and menu prices.

For their appetizer, the students prepared three citrus ceviche of Mahi, served on fresh guacamole with fresh corn tortillas and butter-glazed shrimp. Their entrée was beef tenderloin crusted by basting in garlic and thyme butter, served on fresh pappardelle pasta with a smoked mushroom sauce and asparagus spears.

For dessert the students served a French dish called oeufs a la neige, which also goes by the name floating islands in English. Their dessert was described as pillows of meringue poached in milk then served in a custard sauce with almond brittle.

The students who participated in the competition were Wenxin Ye, Jackson Moore, Tony Palma, Kaylea Tucker and Berenice Rodriguez.

“The level of professionalism and expertise displayed by the students at the competition was amazing,” PHS Culinary instructor Chef Doug Allen said. “There were many after school practices leading up to the competition. They even came to school during Christmas break to practice.”

On the day of the competition, students had one hour to cook and plate their meals. Four students cooked and one student was the expedite, which is the person who oversees the entire process, making sure the food was being cooked in a timely manner.

The PHS team placed second among twelve teams from high schools across the state. The team of five was competing for a spot in the National ProStart Invitational in North Charleston, South Carolina in April.

The first place spot went to Albertville High School. The school will represent Alabama at the national competition, which will feature the winning teams from various states.

This was Pelham’s second year participating in the competition. Last year the team did not place. Allen said he’s proud of the team’s progress.

“They’re passionate about what they do,” he said. “When they went into the kitchen for the competition, I couldn’t be in there. They were on their own. When I saw that they had executed each plate the way that we practiced, I was so proud of them. My wife asked me, ‘Do you have a tear in your eye?’ and I think I did. I was just such a proud moment for me.”

PELHAM – On Tuesday, Feb. 28, the Pelham YMCA will be kicking off its 2017 Campaign that raises money to... read more