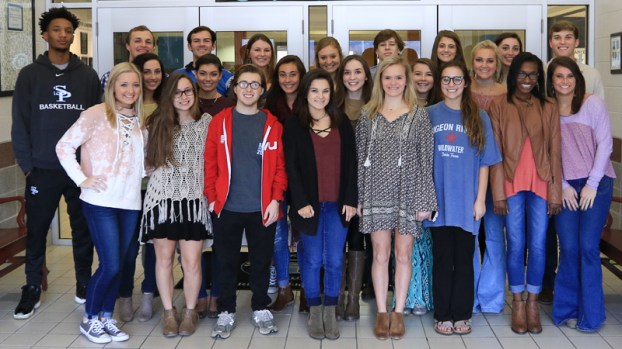 Spain Park High School SGA members have raised about $7,000 for Make-A-Wish, with time still remaining in the school year. (FOR THE REPORTER/DAWN HARRISON)

Johnson was elected as a senior representative.

“Everyone loved the idea,” Strickland said.

HoopComing turned out to be an integral part of the SGA’s fundraising for the Make-A-Wish Foundation.

Johnson said he thought there was an opportunity for the school to have events centered around basketball the way Homecoming brings the community together during football season.

Johnson’s idea for HoopComing would turn into part of a larger effort to raise money for Make-A-Wish, which the SGA adopted as its charity of the school year.

“She really became passionate about raising money for that foundation,” Strickland said.

In fall 2016, there was a spirit chain competition with rival Hoover High School, with one dollar donations purchasing a link in the chains, which were displayed at the annual football game.

About $1,000 was raised through this effort.

Faculty and staff members were given two opportunities to wear jeans for one week for a $10 donation—first the week before Thanksgiving 2016 and another chance coming up in March.

Donations from the first “Jeans Week” yielded more than $300.

Spirit nights at local locations of Mugshots and Chipotle netted about $500, volunteers sold water bottles at a Sadie Hawkins dance with proceeds being used as donations and $1,100 was received from anonymous donors.

“It was great to have the community hear about it and want to contribute,” Strickland said.

The week before HoopComing week, the SGA contacted counterparts at Berry Middle School and asked about their interest in helping with the effort.

Spain Park SGA members helped Berry organize a spirit chain competition among grade levels that raised about $1,500, and the Berry SGA members were recognized at the SPHS pep rally for their contributions.

“I hope that it got them really excited to come to Spain Park and have a leadership role,” Dees said.

HoopComing week included dress-up days for students, a pep rally and soliciting donations at the door of Spain Park’s basketball games against Vestavia Hills on Jan. 31 and Hoover on Feb. 3.

The most significant part of the effort was HoopComing Court.

The nominees attempted to earn their way onto the court by raising the most money.

During the rivalry game against Hoover, which Spain Park won 67-63, Hoover Toyota pledged to donate $25 for every 3-pointer made and $100 for every slam dunk.

After nine 3’s and a dunk from Johnson, $325 was added to the donation total.

HoopComing week resulted in $4,049 in donations, bringing the total for the school year to about $7,000, which was the goal for the year.

“We’re not done,” Strickland said. “We still have a couple of things we want to do.”

A grand reveal is planned for Celebrate Hoover Day in April, where the city’s two high schools will announce their fundraising totals.

FROM STAFF REPORTS HOOVER – Run, walk and have lots of fun! That is the plan for the Third Annual... read more