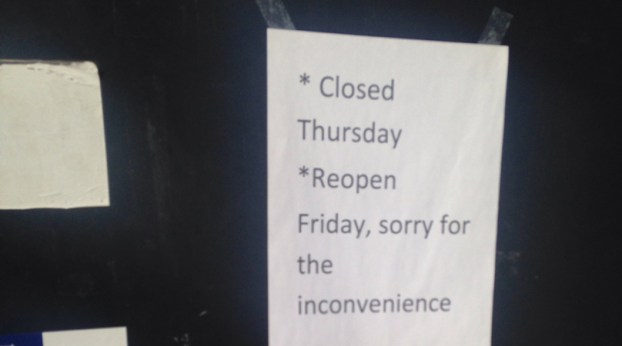 Alabaster businesses closed their doors for a day in response to President Donald Trump’s immigration agenda. Many businesses posted signs on their storefronts notifying customers in advance. (Reporter photos/Amalia Kortright)

ALABASTER- Rosie’s Fashions, Brito’s Supermarket, Chico’s Detail Shop, Sol Azteca and Delicious Bakery in Alabaster all closed their doors for business in observance of “A Day Without Immigrants” on Thursday, Feb. 16.

“A Day Without Immigrants” is a national protest against President Donald Trump’s immigration agenda.

During “A Day Without Immigrants,” many immigrants across the United States closed their businesses, took the day off from work, did not attend classes and did not buy anything.

“It’s a way to show our disagreement with what the government is doing against immigration. We want to show the president that this isn’t the right way,” Brito’s Supermarket owner Reinel Brito said. “We need to stick together and make our voice heard.”

Rosie’s Fashions co-owner Christy Gonzalez said she closed her business to show solidarity with other immigrants.

“We’re trying to show immigrants and the Hispanic community that we are with them,” Gonzalez said. “We want to show this country that immigrants count.”

Gonzalez, who opened Rosie’s Fashion nine years ago with co-owner Lesman Caseillas, said she has seen firsthand how the work of immigrants benefits the community.

Brito’s Supermarket has four locations, two of which are located in Shelby County. Brito speculated that a society without immigrants would collapse.

“Immigration is the key to the workforce in the U.S. Everywhere you go, you see us working different jobs,” Brito said. “Without immigrants, the economy would suffer the most.”

While most of her interactions in the community have been positive, Gonzalez said she and other immigrants have dealt with racism and xenophobia.

“Some people only look at the color of your skin and want you to go away because you are Latino,” Gonzalez said. “They don’t know whether you’re illegal or legal, they just want you to go back.”

According to Gonzalez, many immigrants in the U.S. are facing difficulties gaining citizenship or staying in the country.

“Too many families are being separated. People who have built their families and raised their children here are having to leave and take their kids back to Mexico and Central America,” Gonzalez said. “My 15-year-old wants to be a doctor. She’s always making A’s, and she’s afraid of what will happen in the future. It’s a scary time for immigrants in America.”

Gonzalez said she hopes “A Day Without Immigrants” will impact the community in a way that raises awareness about immigrants’ contributions to society.

“We’re thinking about how the local business community needs these workers,” Gonzalez said. “We hope people notice that [immigrants] came here to work. We don’t want to hurt anyone or make problems. We think that this is how we make America great.”

Alabaster-based nonprofit organization Many Infinities is gearing up for its second-annual Polka Party fundraiser Feb. 18. Teen volunteers from the... read more