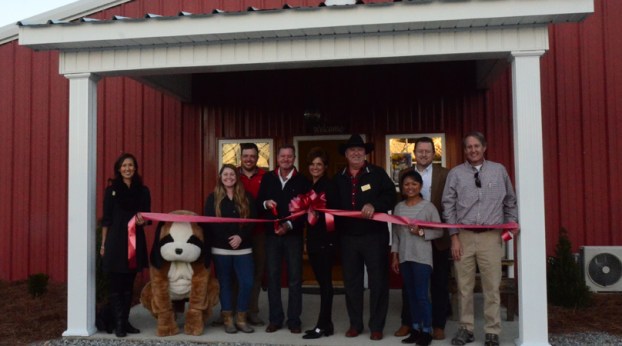 COLUMBIANA- The Canine Country Club, located on the border between Chelsea and Columbiana, celebrated its grand opening and ribbon cutting ceremony on Thursday, Feb. 16. Co-owners Jackie and James Hale began the work to convert several of their horse stables into a space to accommodate 20 four-by-six foot kennel spaces and an indoor play area in early November, 2016.

“We just basically took half of our horse stalls and converted them into dog kennels,” James Hale said. “I’ve always loved dogs, they are my life.”

According to James Hale, the Canine Country Club began taking boarders during the 2016 holiday season, and were officially recognized by the county as a business in February.

“Shelby County just released us, and we’re totally open now. We just had a few things like designate handicap parking and add handicap accommodations to our bathroom that we needed to,” James Hale said. “It took us a little longer than expected, but we’re ready.”

During the grand opening, members of the Chelsea and Columbiana communities were able to tour the kennel spaces and the indoor play area, which features artificial grass designed for dogs. James Hale has also mounted a flat-screen TV for the dogs’ entertainment.

A large, fenced-in area was also recently built to allow the dogs to play outside. Because he has found that many dogs enjoy watching television,

James Hale said he and Jackie live on the Canine Country Club property, and they will be available onsite in case of emergencies.

The Canine Country club does not charge extra to dispense medication to dogs, and staff will give the dogs a bedtime treat, tuck them in, check on them and give them rides on a golf-cart.

James Hale said business has been good so far, and most customers have been pleased with their dogs’ experience.

“The dogs that stayed with us over the holidays have come back, and we’re expecting ten dogs this weekend,” James Hale said. “I think this is going to work.”

Columbiana mayor Stancil Handley and representatives from the Shelby Humane Society were present for the ribbon cutting, which was sponsored by the South Shelby Chamber of Commerce.

To make a reservation or learn more about the Canine Country Club, visit Caninecountryclub.pet or call 258-2582. A 10 percent discount is offered to military personnel and owners of rescued dogs.