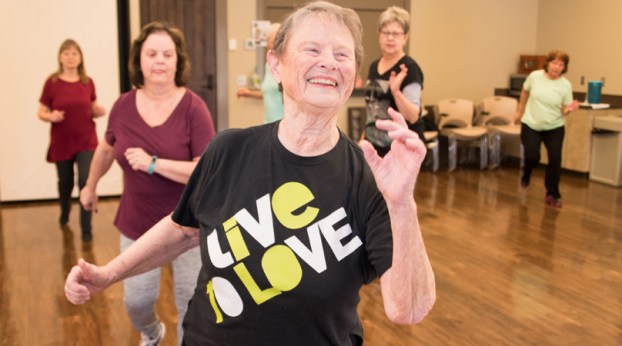 Calera resident Suanne Ferguson has taught Zumba Gold classes at the Alabaster Senior Center every week for about seven years. At 81 years old, Ferguson is currently the oldest Zumba instructor in the U.S. (Reporter photo/Keith McCoy)

ALABASTER- Calera resident Suanne Ferguson has taught Zumba Gold classes at the Alabaster Senior Center every week for about seven years. At 81 years old, Ferguson is currently the oldest Zumba instructor in the U.S.

“There’s actually no official title, but I’m probably the oldest Zumba teacher in the world, possibly in this country,” Ferguson said.

Ferguson has been Zumba certified for nine years, and has taught dance classes for 65 years.

“I went to two Zumba classes at first, and I loved it and decided that it was something I wanted to do,” Ferguson said. “I’ve been a dancer all my life.”

Ferguson has been a Zumba Gold teacher at the Alabaster Senior Center since it opened in 2010.

“It’s a good place to work, and there are a lot of enthusiastic seniors here. Alabaster has a very energetic program here, and I find that the seniors here are fun people to be around.”

While there are many things that senior adults can do to maintain their health, Ferguson said dance is especially beneficial.

“Of course, exercise is important. Now, there are studies that are specifying dance. There was a 20-year study that ended in 2004, where they were trying to find the best activities to prevent dementia and possibly reverse it. Dance came up as 76 percent effective,” Ferguson said. “It’s because of the way dance challenges the brain and the body to work together.”

Ferguson said participating in some form of recreational dance does more than just prevent dementia.

“A bunch of other studies have shown that dancing also helps with heart disease, blood pressure and other issues that seniors deal with,” Ferguson said.

“Zumba Gold is just like regular Zumba programs as far as rhythms go, but it’s much lower-impact. We take out things that might be dangerous for seniors like twisting, jumping and quick turns. Other than that, we do basically everything that’s in regular Zumba. A person who is taking regular Zumba classes would still feel like they’re getting a good workout in this class,” Ferguson said.

According to Ferguson, being a Zumba Gold instructor helps her relate to her classes better than a younger instructor would.

“They tend to think that if I’m 81 and I can do it, they can do it, too. I’ve heard people say exactly that in the past week. They might not think that way when a twenty-something or thirty-something person comes in.” Ferguson said. “The issues that seniors face are very real to me, and I know what everybody’s dealing with.”