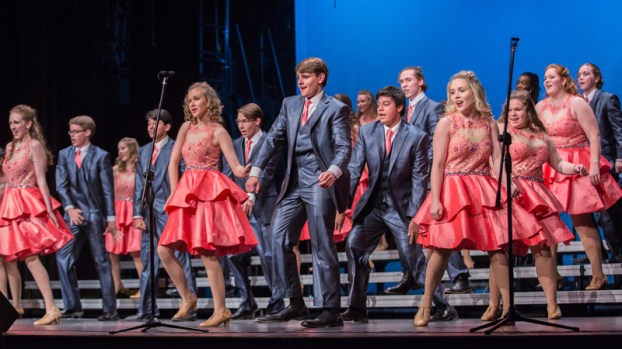 HOOVER – All six of the Hoover City Schools show choirs will perform on the same stage on Friday, Feb. 24.

Jim Schaeffer, choral music director at SPHS, said he and his Hoover High School counterpart, John Kincaid, started in their positions last year, and Kincaid had the idea for the showcase.

“It’s a way to give back to our students, parents and community.”

Each performance will last a little under half an hour, and the extra time is needed to prepare for the next performance.

Most groups include about 45 students, and some also have stagehands and live bands.

Last year’s event attracted a standing-room only crowd in the SPHS auditorium, which is the largest in HCS with a seating capacity of about 450 people.

Because of the expected overflow crowd of spectators, Schaeffer said attendees should reserve auditorium seats for the family and friends of the group performing on stage at a particular time.

Other attendees can watch a live stream in the school lunchroom, which is adjacent to the auditorium.

Concessions will be sold, as will event posters for $5 and DVDs of school performances for $20.

Other vendors may be present also.

Schaeffer said show choir performers are all part of a well-rounded choral department.

“What you’ll see at our Show Choir Showcase is music that’s a little more modern and contemporary and pop—music you would typically hear on the radio,” he said.