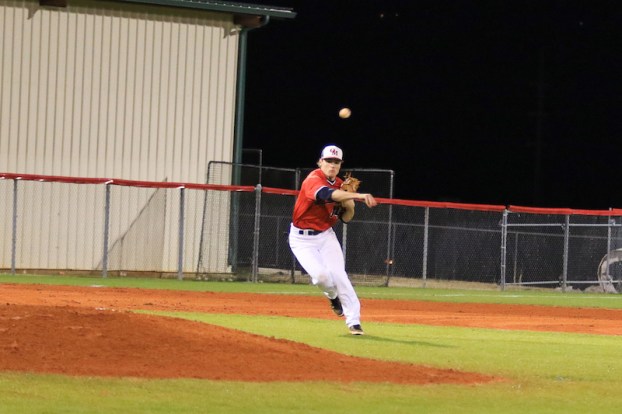 The Eagles have high hopes for this season after upsetting No. 2 Vestavia in the first round of the playoffs a year ago under first year head coach Derek Irons. Now Irons has a year under his belt and plenty of talent back including two All-County First Team players in outfielder Ethan Holsembeck and Pitcher Joseph Hartsfield.

Oak Mountain got their season under way with an 11 a.m. first pitch against Stanhope Elmore on Feb. 20. Despite outhitting Mustangs 8-4, the Eagles fell by a final of 12-7 to drop their opener thanks in large part to a six-run sixth inning.

Batting in the leadoff spot, Holsembeck picked up right where he left off last season by driving one over the left field wall for a homerun to start the Eagles off strong as they took an early 1-0 lead. Stanhope answered with two runs in the bottom of the frame, mainly due to several errors.

In the top of the second, the Eagles busted the scoring open thanks to another hit from Holsembeck, this time a single with two outs. His single was followed by back-to-back doubles from Hartsfield and John McDonald which drove in a total of three runs in the inning to go up 4-2.

In a game of back-and-forth, the Mustangs answered back in the bottom of the third inning with two more runs to tie it up at 4-4, before the Eagles came back with a solid three-run top of the fourth. The runs came from an RBI single by Holsembeck, a fielder’s choice by Hartsfield and an error by the Mustangs’ shortstop to give Oak Mountain a 7-4 lead.

The Eagles gave up one run in the bottom of the fourth and fifth innings, but still held a 7-6 lead. After going scoreless in the top of the sixth, Stanhope exploded for six runs in the bottom half of the inning thanks to several errors by the Eagles to take a 12-7 lead, which ended up being the final score.

Holsembeck went 3-4 with two RBIs and a home run in the game, while Hartsfield also had a nice game going 1-4 with three RBIs. Gene Hurst got the start for Oak Mountain and went four innings allowing just one hit, but giving up five runs, only two of which were earned. Hurst also tallied six strikeouts in the game.

In game two, Oak Mountain rebounded nicely with a 6-4 win over Holtville to even their overall record at 1-1 after their second game of the day.

Just like game one, the Eagles started out nicely with yet another lead off hit from Holsembeck who started the game with a double to left field. That set the tone for Oak Mountain as three runs crossed the plate in the inning.

After getting several more baserunners on in the bottom of the second inning, the Eagles saw three more runs come home to give themselves a hefty 6-0 lead early in the game.

In the top of the third, Oak Mountain starting pitcher Scott Fleming had a little bit of a scare giving up four earned runs, but was able to escape the inning without any further damage and his team still leading 6-4.

Oak Mountain didn’t score the remainder of the game, but the pitching of Fleming, Kade Sanders and Caleb Floyd was steady enough down the stretch to not allow any further runs by Holtville as the Eagles got the 6-4 win.

Fleming threw five innings giving up six hits and striking out four, while Floyd grabbed two strikeouts in his one inning pitched. Hartsfield went 3-4 from the plate with one RBI, while McDonald went 1-3 with three RBIs.

By ALEC ETHEREDGE | Sports Editor HUNTSVILLE – Coming off of a 2016 season where Shelby County had two wrestling... read more