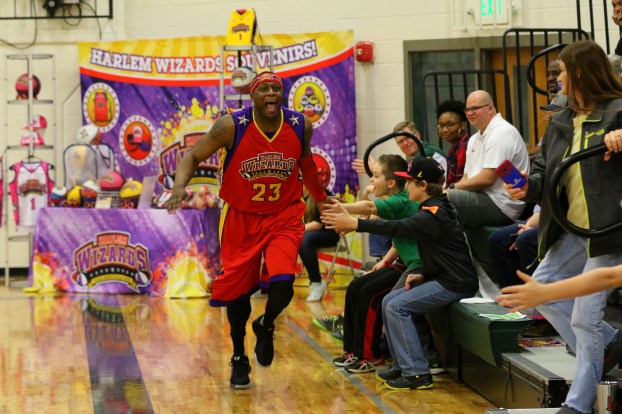 Harlem Wizards player, Space Jam, gets the crowd pumped before the game. (For the Reporter/Eric Starling)

PELHAM – Pelham High School’s gymnasium was full of excitement and laughs Saturday, Feb. 18, as the Harlem Wizards traveled to Pelham to take on the Pelham Dream Team.

The Dream Team, made up of 28 local leaders, teachers and community members, played four eight-minute quarters against the Harlem Wizards. The Harlem Wizards began in 1962 and now travel around the world entertaining audiences for schools and nonprofits, which has resulted in millions being raised for fundraisers.

In the middle of the first quarter, the Harlem Wizards, a team that incorporates fun tricks and interaction with the crowd into their games, stopped to perform their rendition of Michael Jackson’s Thriller.

Harlem Wizards players had nicknames such as “Broadway,” Loonatik,” “A-Train,” “Space Jam” and “Showtime.” Members of the Dream Team also had nicknames.

At the end of the first a member of the audience played a game for a chance to win Harlem Wizards merchandise. Impromptu dance sessions and skits throughout the game made the event fun for everyone.

Dream Team member, Joel Floyd, PHS boys basketball coach, said it was a fun change to be on the court rather than on the sideline.

“When I was asked to participate I agreed right away,” Floyd said. “This is a great event that supports the band and promotes Pelham in general.”

PHS Law Academy teacher Karen Varner said she helps with the basketball team, but has no athletic experience.

“It’s lots of fun, you just have to take it all in fun and just go with it,” Varner said.

During half time, the Harlem Wizards, signed autographs and took pictures with fans.

“I’m so proud of the turnout,” Ward said. “It turned out to be a nice community event and we hope to continue it every year.”

Ward said the funds will be used to help offset the cost of operating the band program, such as covering travel expenses and buying new uniforms.

The members of the Pelham Dream Team were: