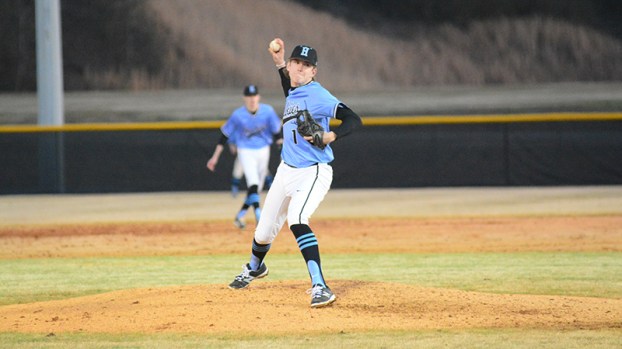 Senior pitcher Riley Davis had a solid outing in game one of Helena’s doubleheader on opening day on Feb. 20. Davis pitched five innings and allowed three hits while striking out four in a 4-2 win against Hoover. (File)

HOOVER–After capturing the program’s first area championship in 2016 by winning the Class 5A Area 7 Championship, the Helena Huskies baseball team opened the 2017 season on Monday, Feb. 20, in a new classification and a renewed focus as they began their first season in the 6A classification.

The Huskies opened the season on the road as they took on Hoover and Florence in a doubleheader on President’s Day, and opening day couldn’t have gone better for Helena, as they defeated Hoover 4-2 and Florence 3-1 to open the season on a high note.

Some late game heroics by Brooks Brophy helped Helena defeat Hoover 4-2 in game one of the Huskies’ doubleheader. Helena and Hoover were tied 2-2 in the top of the seventh inning when Brophy singled off a Hoover pitcher to drive in one run to put Helena up 3-2.

Later in the inning, Troy Cordrey hit a ground ball and reached first base after an error by the Bucs. This resulted in Lawson Peoples scoring from third to put the Huskies up 4-2.

Davis was the opening day pitcher in game one for the Huskies and had a solid day on both the mound and at the plate.

Davis pitched five innings where he allowed two runs and three hits while striking out four.

At the plate, Davis drove in a run in the top of the second inning on a two-out single to put Helena up 2-1.

Cordrey came in for relief of Davis and pitched the final two innings where he allowed just one hit to preserve the two-run victory for Helena’s first win of the season.

In game two of the doubleheader, Helena used solid pitching and timely hitting to defeat Florence 3-1 for the second win of the day.

The Huskies got a solid outing from starting pitcher Landon Green who pitched five innings and gave up just one hit. Green also struck out four and gave up no runs.

With a scoreless game through two innings, Helena got on the scoreboard first after a couple of errors by Florence pitcher C. Henry.

Leading 1-0, Helena scored another run in the third inning when Jake Busby doubled to left field to score Josh Daugherty to put the Huskies up 2-0.

The score would remain 2-0 until the bottom of the sixth inning when Brophy doubled to left field to score Peoples to extend the lead to 3-0.

Down to their final three outs, Florence needed at least three runs to extend the game but fell short.

Florence scored one run in the top of the seventh on a two-out single but it was too little, too late as Brophy recorded the final six outs to collect the save for Helena.

Brophy struck out four and allowed one earned run in the final two innings.

By GRAHAM BROOKS / Staff Writer MONTGOMERY–After jumping out to a 23-22 halftime lead, the Lady Huskies seemed poised for... read more