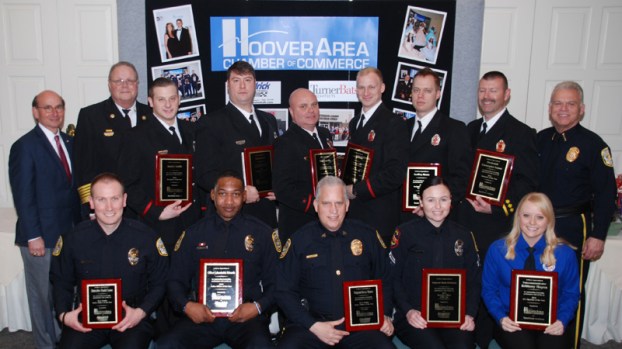 Police officers, firefighters and other public safety employees were honored with awards at the Hoover Area Chamber of Commerce luncheon on Feb. 16. (CONTRIBUTED)

HOOVER – Hoover’s best in public safety were honored at the Hoover Area Chamber of Commerce Luncheon on Feb. 16.

The chamber recognized police officers, firefighters and other public safety employees for the 22nd year.

The luncheon was held at the Hoover Country Club.

Award winners were determined by peers in their respective departments and were not announced until the luncheon.

Supervisors nominating members of their departments were asked to answer basic questions regarding the nominee and provide any additional information they thought would be helpful in determining the individuals best qualified as the most outstanding department member for the year.

Many family members of the honorees were in attendance.

“Exceptional service is one of our core values,” Lowe said. “We see people on their worst days when we’re called.”

Robert Smith, Geoff Moore and Justin McKenzie were named Paramedics of the Year for their service while on call during an ice storm that made roadways hazardous.

A Hoover woman went into labor, and during transport to the hospital, the woman gave birth to two healthy babies.

Chris Fulmer, Tony Conville, Dan Jackson and Austin Smith were named Firefighters of the Year for rescuing three people from a fire at an apartment complex.

“We’re living in a different time,” Derzis said while expressing appreciation for the support police officers receive in Hoover. “I’m so proud to call Hoover home.”

Maria Robinson was named Correctional Officer of the Year.

Derzis said Robinson became suspicious of a bottle of body wash that was being delivered to an inmate and discovered the bottle had been stuffed with a balloon that contained an illegal substance.

Brittany Hayes was named Telecommunicator of the Year.

Derzis said Hayes took a call from a robbery victim and through a conversation with the victim learned she had also been raped. Hayes was then able to help connect the incident with two other robberies in the same area, leading to the arrest of the suspect.

Lakenderick Edwards was named Police Officer of the Year.

On two different occasions, Edwards responded to a burglary and a robbery, and each time was able to locate a suspect.

Other nominees for Police Officer of the Year included Daniel Lowe and Rocco Renno.