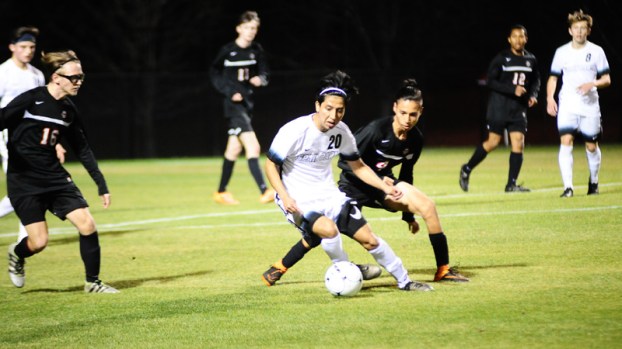 HOOVER – After graduating 12 seniors out of a total roster of 22 players from last year’s squad, the identity of the 2017 Spain Park High School soccer team is still being determined.

The process is off to a nice start, as the Jaguars are 2-0 while relying on many new faces.

Fourth-year head coach Matt Hall knew the graduates would be missed but has been pleased with the play and leadership of this year’s six seniors.

“It’s a really competitive group in practices and going through all the drills,” Hall said. “They’ve done a good job.”

There are still several names Jags fans are familiar with.

Senior Liam Condone, who plays center back, competed for the state all-star team in summer 2016 and has committed to play college soccer for the University of West Alabama.

Senior midfielder Dico Bradley will have the opportunity to play at High Point University in North Carolina.

Another senior, Zach Cole, is the team’s biggest and strongest player at 6-foot-1, 210 pounds.

Brooks Rice, a solid finisher on goals, returns to the team for his junior season after missing last year while competing in the travel circuit.

And goalkeeper Trevor Bernier, a sophomore, was named to the all-metro team last year.

“I feel like this team is very competitive, technically very strong and skillful on the ball,” Hall said. “We’re just looking for that leadership and cohesiveness.”

Spain Park won 13 games last season, a high mark for Hall’s tenure, and earned a berth in the state playoffs.

The Jaguars fell in the first round to Oak Mountain—the eventual state champion—by a single goal scored with 7 minutes remaining in the game.

“We’re looking to build on that,” Hall said about the strong 2016 campaign but mentioned that the task will be difficult with area opponents such as Oak Mountain, Mountain Brook and Huffman. “It’s going to be a challenge for us.”

“We wanted our first game to be an eye-opener and to find out really quickly where we’re at,” Hall said.

After getting some balls behind the Homewood defense in the first half, the Jags finally scored with about 9 minutes remaining until halftime on a counterattack goal.

Condone won the ball in his defensive third and quickly played it forward to Sumpter down the left wing.

Sumpter played a ball between two defenders to a streaking Rice, who outraced the defenders and got the ball past the keeper.

“The second half was more of a gut-check,” Hall said. “They came out strong, and we just gutted it out.

“It was a really good first game for us. We saw where we could improve.”

In their home opener against Thompson on Feb. 17, the Jags scored two quick goals in the first half and then another in the second half for a 3-0 win.

Rice scored first when a blocked shot by Bradley found its way to Rice outside the penalty area, and he placed it in the bottom corner of the net on a one-touch shot.

About three minutes later, Bradley sent a cross to the back post that Rice finished with a side volley.

Rice completed the hat trick with two minutes left in the game when he received a pass from Yusef Hamid, cut inside the penalty area and found the corner of the net.

Bernier made three saves during the game to record his second shutout of the season.

The Jaguars will be on the road this week, visiting Helena on Feb. 21, James Clemens on Feb. 24 and Daphne on Feb. 25, and returning home on March 2 to host Mountain Brook.