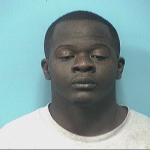 The case was continued “Upon motion of the parties to complete and review discovery, evidence, witnesses, testimony, sentencing standards and/or promote settlement,” according to court documents filed on Feb. 7.

Damian Lamar Jackson was arrested and charged with manslaughter, unlawful distribution of a controlled substance and leaving the scene of an accident with injuries on May 3, 2016. The charges came after 33-year-old Helena resident Holley Myrick was pronounced dead at the scene of the incident on the afternoon of Monday, May 2, 2016.

Circuit Court Judge Lara Alvis, on Jan. 3, denied a bond reduction request from the 28-year-old Jackson, after “counsel from both sides presented their respective positions.”

The request to lower Jackson’s bond, which was filed in early December 2016 by Jackson’s attorney, Dan Alexander, claims Jackson’s $75,000 bond is “inappropriately and unconstitutionally high” for a non-capital offense.

Jackson wanted a reduced bond in order to be released under supervision of a pre-trial release or to be released to reside at a work release center, according to court documents.

Jackson will remain in the Shelby County jail and is set to appear in court next for the status call hearing on April 25, at 8:30 a.m.