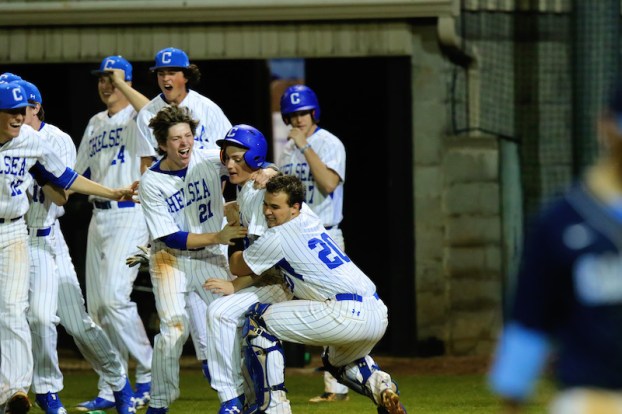 Chelsea players celebrate after a wild pitch allowed an already stealing Jacob Tinnell to score for an opening night win. (For the Reporter/Cari Dean)

Hornets win thriller in extras over Calera on opening day

CHELSEA – The Chelsea Hornets are coming off a 2016 season they would like to forget in which they won a grand total of 12 total games and zero area games to miss the playoffs altogether.

The Hornets had a chance to start their 2017 campaign on a high note by hosting a very good Calera Eagles team, and they did just that. It didn’t come easy, but they couldn’t have asked for a more fun and perfect way to start a baseball season as Chelsea got the win in extra innings by a final score of 3-2.

“Starting the season with a win was very important for this year’s group,” Hornets’ head coach Michael Stallings said. “I talk with the guys a lot about what their team identity is going to be, and they showed what they’ve been saying all along by playing with a lot of passion and fight.”

The action didn’t happen until late as both starting pitchers and bullpens had strong showings throughout the game. Brendon Case got the start for Chelsea and threw five solid innings only giving up one earned run and two hits.

Tyler O’clair of Calera also had a nice outing pitching for six innings and tallying eight strikeouts. His one earned run came in the bottom of the first off of a William Root single that drove in Josh Gregg.

The damage was limited to just that one run before O’clair settled in to throw five consecutive scoreless innings. Calera answered the Hornets’ first inning run immediately in the top of the second on a double from Jacob Smith that drove in John Ellison to knot the score up at one apiece.

“Calera has a very, very good team with some top arms,” Stallings said. “It was a game in which both sides pitched very well and it was kind of one of those deals of who was going to crack first.”

Calera started the fun in the top of the eighth when Austin McKinney led off with a triple to straight away center field.  After a groundout from Kevin Dowdell, Chelsea put Quin Darius Crew aboard with a five pitch walk to give the Eagles runners on the corners with one out.

On the second pitch Ellison saw in Calera’s next at bat he singled to right field, which drove in the go ahead run. Connor Burnett was able to strike out the next two batters to limit the damage to just one run.

Coming into the bottom of the eighth, Chelsea needed one run to tie the game and two to win. Brendon Case made sure to start the inning off right with a leadoff double to left field on the first pitch he saw to put a runner in scoring position with no outs. During Gregg’s at bat, Case advanced to third on a passed ball to move him closer to home.

After Gregg struck out swinging, Root came to the plate and nailed a single to right field that drove in Case to tie the game. The Hornets had nothing doing the rest of the inning to send the game to the ninth.

Calera went 1-2-3 in the top of the ninth with three straight groundouts, which set up a chance for Chelsea to win it in the bottom half of the inning.

Jacob Tinnell came up to bat first and singled to center field to give the Hornets a base runner. DeWeese came up next and reached on an error by Smith at first base, which allowed Tinnell to advance to third to put runners on second and third with no outs.

After a strikeout by Nolan Forehand, Case came back to the plate. This is when Stallings called a suicide squeeze attempt on a 2-1 count as Tinnell stole third and Case prepared to bunt. McKinney clearly was distracted as he threw a wild pitch that got past the catcher allowing Tinnell to cross the plate for a Hornets win.

“We had second and third with one out in a 2-0 count,” Stallings said. “They called a timeout, which gave me a chance to talk with my hitters and base runners. I told Case if he doesn’t get a hit on the 2-0 count we are going attempt a squeeze on the next pitch, which ended up working in our favor.”

Root went 2-4 on the day with two RBIs to lead Chelsea. Gregg also went 2-4 with one run scored in the game. Calera was led by Ellison who went 3-4 with one RBI.

“I was very pleased with the amount of strikes we threw tonight,” Stallings said. “That’s one area we have struggled with in the past, but we gave our defense a chance by doing so.”

From Staff Reports It was a strong season for the Evangel Lightning girls’ basketball squad, which was most recently capped... read more