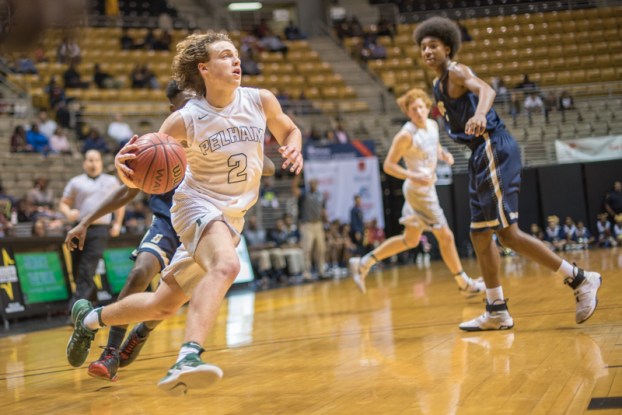 Justin Allison struggled shooting in the loss, but proved in his junior season he has a bright basketball future ahead of him. (Reporter photo/Keith McCoy)

MONTGOMERY – Coming off their 58-31 thumping of Wetumpka in the Sweet 16 on Friday, Feb. 17, Pelham carried a ton of momentum into their Regional final matchup with Paul Bryant High School.

The two teams came into the game with one goal in mind, getting to the BJCC as one of the final four teams from the 6A classification. Pelham spent much of the year as the No. 1 team in 6A, but Bryant was every bit as good as them with the amount of height and athleticism they brought to the court.

This is the same Bryant team that put up 82 points to end No. 3 Helena’s season last week.

The Panthers ended up playing one of their best defensive games of the year as they held the Stampede’s potent offense to just 50 points, but thanks to a second quarter where Bryant forced nine turnovers to outscore the Panthers 14-6, Pelham’s season ended one game short of the Final 4 as the fell in a heartbreaker 50-46. 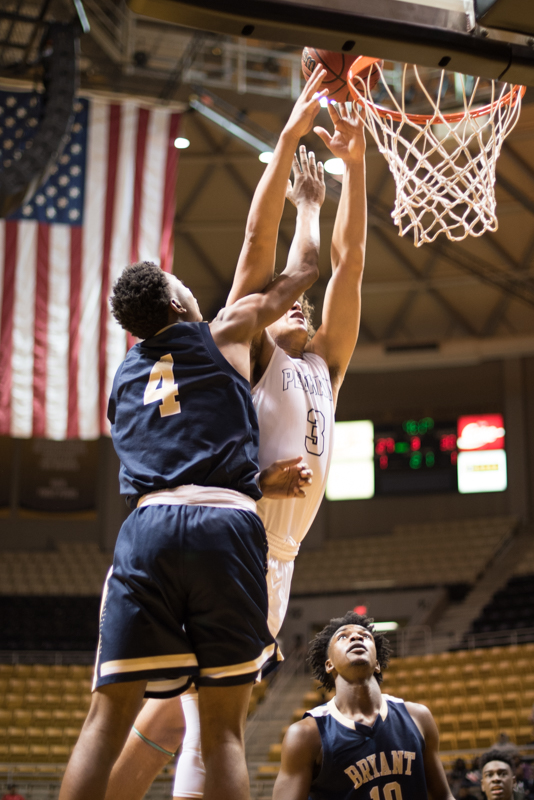 Reese attempts a dunk over the Bryant defender during the game. (Reporter photo/Keith McCoy)

Pelham had plenty of chances to take the lead or tie in the final quarter, but they just couldn’t get over the hurdle. After trailing 45-40, they went on a 4-0 run to cut the lead to two and when Chris Brown got fouled on an offensive put back, he went to the line with a chance to tie the game.

Brown hit the first, but missed the second to bring the Panthers to within one at 46-45.

The two teams then traded free throws as Bryant continued holding their one-point lead at 47-46. On the Stampede’s ensuing possession, Pelham’s defense forced a travel to give them the ball back with under a minute remaining. Justin Allison went on to miss a jumper just beyond the free throw line that would have given them the lead and Pelham was forced to foul Bryant leading to two free throws.

Trailing 49-46, they still had a chance with time left to tie the game on a 3-pointer, but thanks to an errant pass into the back court that Rottier just missed saving, the Panthers turned the ball over with 4.1 seconds to play ending their chances.

Bryant went on to make one of two free throws to win by the final of 50-46.

Pelham started the game strong with a 17-12 first quarter and if it weren’t for two 3-pointers that could have just as easily missed, they would have been up by more.

The second quarter, however, was a struggle for the Panthers. Bryant came out in the second period showing a full court press, something they found success with and stuck with the remainder of the quarter.

The press and length of the Stampede clearly affected Pelham as they turned the ball over nine times in the period and were able to get zero ball movement. Bryant outscored Pelham 14-6 in the quarter behind three 3-pointers from Steven Watkins to take a 26-23 lead into the half.

Both teams played very even in the third, but a stretch where Bryant forced two steals that led to back-to-back dunks was the difference in the quarter as they outscored Pelham 13-12 to extend their lead to 39-35 at the end of three.

Pelham looked much more like themselves in the final quarter forcing five turnovers which led to the climbing back into the game. Unfortunately, it wasn’t quite enough as they fell in a tight contest thanks to that second quarter.

Alex Reese led Pelham with a double-double that included 14 points and 11 rebounds in his last game for the Panthers. Allison tallied 13 points on 4-17 shooting from the field, including 1-7 from beyond the arc. Derrick Bush, who hustled the entire game and would’ve been the difference maker had they won, grabbed 10 points, three steals and two rebounds.

Allison and Reese were both named to the All-Tournament team. Although they came up short, this was a close group of guys that had an extremely successful season.

Hornets win thriller in extras over Calera on opening day

By ALEC ETHEREDGE | Sports Editor CHELSEA – The Chelsea Hornets are coming off a 2016 season they would like... read more