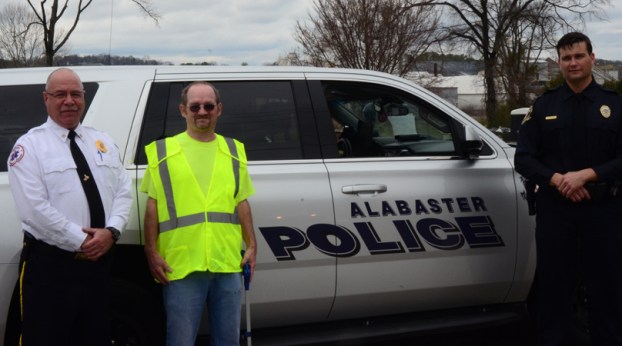 John Ellison began the Alabaster Public Servants Foundation’s initiative to keep the city cleaner by picking up garbage on the side of First Street Southwest on Saturday, Feb. 18. (Reporter photo/Amalia Kortright)

ALABASTER- John Ellison, founder of Alabaster Public Servants Foundation, has partnered with the Adopt-A-Mile program to help clean up Alabaster roads and raise awareness about littering.

Ellison said the Alabaster Public Servants Foundation is a new organization in Alabaster, and using the Adopt-A-Mile program is the group’s first citywide initiative.

“This is a group that I’m just getting together to give back to our first responders in Alabaster. I’m hoping that this grows, and that more people will get involved,” Ellison said. “I’ve lived here all my life. I should have started this when I was younger, but when you’re young, you don’t think about it.”

“It’s about a mile and a quarter, but it’s going to be a start,” Ellison said.

While he was out working, Ellison said he was especially surprised by how many cigarette butts he picked up.

“It really saddens me to see all of the cigarette butts on the side of the road,” Ellison said in a Facebook post. “Please have enough respect to empty your butts in a garbage can. I will be working on getting a tool of some sort to clean up all of the [cigarette] butts I can.”

On Feb. 18, Ellison filled four trash bags and worked for around four hours.

Ellison said he plans to organize Adopt-A-Mile events at several other locations around Alabaster, and is currently searching for the areas that need the most work. He hopes to include local Boy and Girl Scout troops and juveniles who need community service hours in his efforts.

Ellison plans to hold one event on a weekly or biweekly basis. The next event is scheduled for Saturday, March 4. For more information about the events, visit the Alabaster Public Servants Foundation Facebook page.

“I just want Alabaster to be cleaner, and with everyone’s help, we can do it,” Ellison said. “It takes everybody to keep our city clean.”